Apple is planning to host an Apple TV+ premiere event for "The Morning Show" in New York City, according to a stage and banners that have been erected at the Lincoln Center plaza in Manhattan.

Based on multiple images shared on social media, Apple has a stage and multicolored signs that alternately highlight ‌Apple TV+‌ and "The Morning Show," an upcoming series starring Jennifer Aniston, Reese Witherspoon, and Steve Carrell. The show is set to premiere tonight, with additional premiere events happening later in the week. 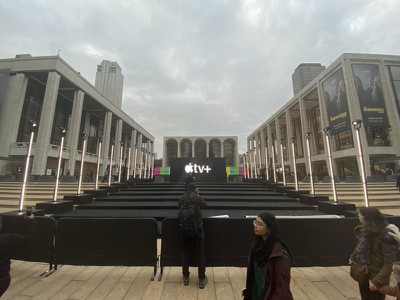 ‌Apple TV+‌ reviews came out this morning and critics were not particularly kind to "The Morning Show" despite its all star cast. The Hollywood Reporter, for example, called the pilot "brutally dull," while Variety said Witherspoon and Aniston couldn't "salvage this politically muddled, underthought, and underwhelming streaming misfire."

Apple appears to be planning to hold a red carpet launch event at the Lincoln Center plaza tonight along with additional showings at the Paley Center tomorrow evening, which will also include a Q&A session with Reese Witherspoon and Jennifer Aniston.

A recent Instagram story from "The Morning Show" suggests ‌Apple TV+‌ is going to debut at 10:00 a.m. Pacific Time or 1:00 p.m. Eastern Time, though earlier reports suggested the service would be launching at midnight Pacific Time on November 1.

‌Apple TV+‌ will also launch with "See," "Dickinson," "For All Mankind," "Ghostwriters," "Snoopy in Space," and more.

Update: Apple has shared details about the official New York premiere of "The Morning Show" in a Newsroom article.

If Apple Keynotes are anything to go by I wouldn't have much confidence in Apple's content creation and direction.

Well it's a good thing Apple itself isn't creating any of their television content then, they're the distributor. The content creators for Apple TV+ shows are independent production companies who then pitch the shows to networks/streaming companies. And those companies decide if they want to buy the show. Echo Films and Hello Sunshine are the creators of The Morning Show. Just goes to show how little you know about how television is actually made.
Score: 11 Votes (Like | Disagree)

Vasilioskn
Is anyone else absolutely uninterested in apples shows?
Score: 6 Votes (Like | Disagree)

H. Flower
In the streaming game, money and star power doesn't matter as much - good story and characters are paramount for success.
Score: 6 Votes (Like | Disagree)

I have been watching film and TV for years and I have the gut instinct to know when a movie or TV show is crap. Recently Martin Scorsese and Francis Copola both said the Marvel Fantasy franchise are all crap and I have been saying this for years now. I have not had the desire to watch a single one of those films. Steve Jobs said it too. Glad to know my thought process is the same as these geniuses.

The Morning show is a similar conclusion. Jennifer Anniston and Reese Whitherspoon are two very average/mediocre actors and their work over the years from Friends to Legally Blond are all forgettable. Steve Caroll has always been unfunny from the get-go and a major point of this was his character in the sequel to Bruce Almighty. Jim Carrey made me laugh my pants off, but Steve's version was just pathetic.

The Morning show to me based on the ads and previews just never gave me a sense of plot or purpose. Its just Apple throwing out shiny objects (Reese and Jennifer) and thinking it would be enough to get us going. Sorry Tim, it doesn't work that way.

Apple needs to create relatable content. You can't relate to any of these characters. It's so obvious, you spent billions and you couldn't figure this.

So, your logic is that because you said Marvel movies were crap (which was then followed by Scorcese and Coppola), then this view is representative of the world? Did you miss how glaringly popular these films are with the general population and just how much they’ve made?

Likewise, you say shows like ‘Friends’ are forgettable? Really? Really? I can’t speak for the country of its inception, but here in the UK, Friends has just been crowned as the most streamed show for the past year - again. No mean feat given it stopped production what, 15 years ago?

I think Apple might know what they’re doing here. Certainly more so than Mr Dee anyway...
Score: 5 Votes (Like | Disagree)

MacLawyer
I wish Apple success in this new endeavor. As for me, I've got all the monthly streaming bills I can handle right now.
Score: 4 Votes (Like | Disagree)

I have the gut instinct to know when a movie or TV show is crap. Recently Martin Scorsese and Francis Copola both said the Marvel Fantasy franchise are all crap and I have been saying this for years now.

Based on what you’re saying, it seems like Apple’s streaming tv service is going to be a huge success.

What's the point in having an event for a show?

Saturday June 12, 2021 3:17 pm PDT by Joe Rossignol
Apple this week previewed iOS 15, which is available now in beta for developers ahead of a public release later this year. One smaller but useful new feature added is the ability to drag and drop images, text, files, and more across apps on iPhone. MacStories editor-in-chief Federico Viticci demonstrated the new feature in a tweet: Using cross-app drag and drop on iPhone in iOS 15. Finally 🎉 #WW ...
Read Full Article • 77 comments

Saturday June 12, 2021 7:01 am PDT by Sami Fathi
In a currently unlisted ad on YouTube, Apple is promoting the versatility, portability, and power of the M1 iPad Pro in a fun musical inspired by The Little Mermaid's "Part of Your World" soundtrack. In the ad, which features the main character using an M1 iPad Pro, Magic Keyboard, and Apple Pencil, multiple users can be seen struggling with their old PCs indoors while hoping that they can...
Read Full Article • 319 comments

Friday June 11, 2021 2:32 pm PDT by Juli Clover
macOS Monterey makes several improvements to password management, positioning iCloud Keychain as an ideal password service to replace third-party services like Lastpass and 1Password. In System Preferences, there's a new "Passwords" section that houses all of your iCloud Keychain logins and passwords so they're easier to get to, edit, and manage. There's a similar Passwords section that's...
Read Full Article • 179 comments