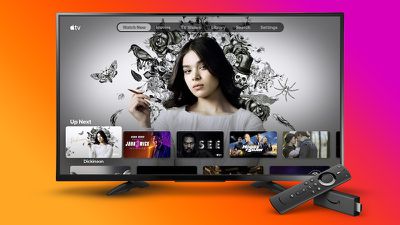 Available through the Amazon Appstore, the Apple TV app allows users to access their iTunes libraries of movies and TV shows and the Apple TV Channels feature through the Fire TV platform. The app will also users to stream original content from Apple TV+ when the streaming video service launches November 1.

As of today, the Apple TV app on Fire TV is available in the United States, Canada, Germany, France, Italy, Spain, India, and the United Kingdom. The app is also available for Fire TV Basic Edition users in over 50 countries.

In addition to Fire TV, the Apple TV app is available on the iPhone, iPad, iPod touch, Mac, Apple TV, Roku, and select 2018 and newer Samsung smart TVs. The app is also coming to select LG, Sony, and VIZIO smart TVs in the future.

Apple TV+ is a Netflix-like subscription-based service that will allow users to stream original TV shows and movies curated by Apple. Pricing will start at $4.99 per month with a one-week free trial. Up to six family members can share a single ‌Apple TV‌+ subscription through Family Sharing.

fmcshan
This is great! I love how Apple is expanding the Apple TV app to more devices like Roku and Amazon Fire TV.
Score: 6 Votes (Like | Disagree)

Your Apple ID is probably the most valuable digital user identity account out there - it holds EVERYTHING (your Mac, your iPhone, iCloud, film & music purchases, software purchases) and you are willing to share your password and details to a cheap, horribly made Amazon or Roku or Samsung product that's constantly connected to the Internet with zero or very few security updates. Are you crazy?

What a terrible idea.

Let's see how long before these devices are hacked!

This is a tragic mistake. Why put your ecosystem on competitors’ inferior products... it’s the same mistake then Apple CEO Skulley made.

I dunno about others, but my preferred streaming platform is Roku. And my spending on Apple TV channel subscriptions has gone from 0 to several now that I can use them on my platform of choice. Maybe that’s why.

It won’t change my preference for buying iPhones, iPads and Macs.
Score: 5 Votes (Like | Disagree)

Scottsdale
This is a tragic mistake. Why put your ecosystem on competitors’ inferior products... it’s the same mistake then Apple CEO Skulley made.

Strategically, it makes far more sense to allow top-in-class products like Apple Watch work with an Android phone than to put Apple software on inferior hardware.

Also, Apple is missing the opportunity to seize the markets by not having its own TV at a much higher price point. And utilize AppleTV to capture those who want to use Samsung TVs and etc.Whatever happened to Steve’s epiphany about TVs and the experience?

I don’t understand taking a company that’s all about innovation and forgetting how to innovate. They cannot figure out how to differentiate anything right now. Just riding on Steve, Jon, and Scott’s hard work, Tim needs to go...

He’s a good person, but a terrible CEO for Apple at this point in time. The executive team has let all the talent go so they can reap as much stock as they can using the same old hardware. The software is starting to suck as bad as old Microsoft software - the new Microsoft is doing great.

I want to see some new innovators come out and lead the company to new heights. Make Apple Great Again.
Score: 4 Votes (Like | Disagree)

Ryan0751
All this seems to do is provide an App that lets users of other media devices to watch AppleTV+ content. Just as Netflix/Hulu/etc. have their apps available for multiple devices.

It's not "Bringing Apple TV software" (as in, that used on the Apple TV hardware) over to other hardware platforms.'

They are trying to increase their AppleTV+ subscriber base.
Score: 3 Votes (Like | Disagree)

Jd3774life
Sweet! I didn't want to buy another Apple TV 4k for the bedroom so this will be a great alternative ?
Score: 3 Votes (Like | Disagree)
Read All Comments