Apple today updated its Mac Configuration Utility for authorized technicians with instructions on how to place the new Mac Pro in DFU mode, according to a reliable source. For existing Macs, this software is used to pair components like the logic board to the Apple T2 security chip after a repair is completed.

We have elected not to share any screenshots to protect our source, but a generic image of the Mac Configuration Utility is below. An option for the new Mac Pro has been added alongside the iMac Pro, Mac mini, and notebooks. 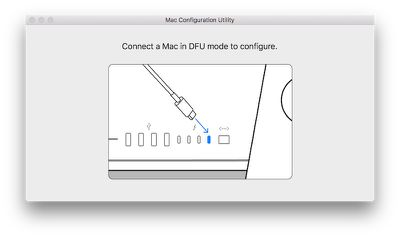 Mac Configuration Utility via The iPhone Wiki
Our source was informed that this move likely means the new Mac Pro will be released imminently. Apple previewed the new Mac Pro at WWDC 2019 in June and said the computer will be available to order at some point this fall, but it has yet to specify a release date.

The all-new ‌Mac Pro‌ is a powerhouse, with up to 28-core Intel Xeon processors, up to 1.5TB of ECC RAM, up to 4TB of SSD storage, and up to AMD Radeon Pro Vega II Duo graphics with 64GB of HBM2 memory. The computer also has eight PCIe expansion slots for maximum performance, expansion, and configurability.

A new design includes a stainless steel frame with smooth handles and an aluminum housing that lifts off for 360-degree access to the entire system. The housing also has a unique lattice pattern to maximize airflow and quiet operation.

Apple says the new ‌Mac Pro‌ provides over 300W of power to the CPU and has a "state-of-the-art thermal architecture" to allow the processor to run "fully unconstrained all the time." This is a significant change from the previous ‌Mac Pro‌, which Apple eventually admitted led it "into a bit of a thermal corner."

Facing mounting criticism that it had abandoned its professional customers, Apple made the rare move of announcing that it would be releasing a new Mac Pro in April 2017, over two years before the computer was unveiled.

The new ‌Mac Pro‌ will start at $5,999 in the United States with an eight-core Intel Xeon processor, 32GB of ECC RAM, Radeon Pro 580X graphics, and 256GB of SSD storage. Apple will also be selling the 32-inch Pro Display XDR with 6K resolution for $4,999, although the stand for the monitor costs an extra $999.

With the chances of an October event becoming increasingly slim, Apple could announce Mac Pro availability via press release.

Is this an attempt to be funny?

The machine is a beast and very capable.
Score: 42 Votes (Like | Disagree)

brofkand
I'm interested as to how many people will buy these. They seem laser focused on the hollywood/pro video markets, especially considering the new display. Relatively limited market, even for Apple.
Score: 24 Votes (Like | Disagree)

I'm interested as to how many people will buy these. They seem laser focused on the hollywood/pro video markets, especially considering the new display. Relatively limited market, even for Apple.

Trust me, there are plenty of us who want it.
Score: 24 Votes (Like | Disagree)

I'm interested as to how many people will buy these. They seem laser focused on the hollywood/pro video markets, especially considering the new display. Relatively limited market, even for Apple.

Correct, this isn't for 99% of the people on this website. This is for companies that need major firepower for editing etc. Of course there will still be those regular users who claim they really have to have it. So they'll toss cash at it which is also what Apple banks on.
Score: 22 Votes (Like | Disagree)