Life insurance provider John Hancock has announced that it is expanding its Apple Watch program so that new and existing members of its Vitality program can receive a 40mm ‌Apple Watch‌ Series 5 for an initial payment of just $25 plus tax. 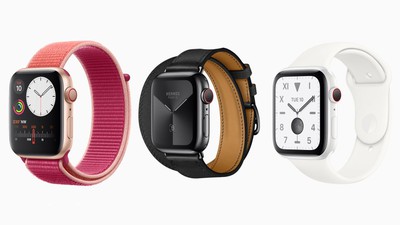 The cost of the ‌Apple Watch‌ is split up into 24 monthly payments, which can be paid off by walking, running, biking, swimming, or completing various other exercises.

Vitality members must earn at least 500 fitness-related Vitality Points per month over two years to avoid owing any of the instalments. Additional fees apply for customers who choose a cellular model or other more expensive models.

By connecting the Vitality Today app to Apple's Health app and confirming data sharing, customers can earn Vitality Points for Light, Standard, and Advanced Workouts towards the monthly goal.

Customers can also share steps measured by their iPhone or ‌Apple Watch‌, as well as active calories from the ‌Apple Watch‌.

The Vitality program is available with select John Hancock life insurance policies in the United States. The free ‌Apple Watch‌ Series 5 offer will be available starting this fall everywhere except New York and Puerto Rico.

John Hancock, owned by Manulife Financial, first started offering Apple Watches to a limited number of members in 2016, before opening the program to all Vitality members the following year.

In a recent survey of John Hancock Vitality members with ‌Apple Watch‌, 84 percent stated they are motivated to exercise by their ‌Apple Watch‌ and 90 percent wear an ‌Apple Watch‌ seven days a week.

In addition, a RAND Europe study of over 400,000 people concluded that those who participated in Vitality's Global ‌Apple Watch‌ programs averaged a 34 percent sustained increase in physical activity compared to participants without an ‌Apple Watch‌.

M.PaulCezanne
Think carefully before sharing health data with a company that profits from that data.
Score: 8 Votes (Like | Disagree)

GuruZac
That’s cool and if it’s keeps people motivated to improve their health, even better.
Score: 5 Votes (Like | Disagree)

This is truly more disturbing than anything Facebook has ever done.

What are you going on about now?

Buy it with exercise!
Good luck with that. If you aren't motivated enough to buy it yourself, a few hundred dollars won't get you off your butt.

For someone that already works out and meets their goals it’s basically a free watch. I don’t see how this could be spun into a negative.
Score: 3 Votes (Like | Disagree)

Too bad term life insurance is such a scam.

Only if you outlive it and can’t change it to something permanent.
Score: 3 Votes (Like | Disagree)

That's always how it starts.

Fast forward to your insurance claim being rejected because one day your heart rate showed an irregularity and you didn't obtain the mandatory doctor's report to account for it so it goes down as attempted insurance fraud.

Except they only get what Apple gives them, and the Heart Rate metric is limited to an occasional BPM value. Data like ECGs which show potential irregularities are not available to Vitality.
Score: 3 Votes (Like | Disagree)

Too bad term life insurance is such a scam.

It's great for people who don't want to overpay for life insurance. Whole life policies are terrible investment vehicles. If you want to read why, there are many articles out there, but this one does a good job of covering the important parts- https://momanddadmoney.com/why-whole-life-insurance-is-a-bad-investment/
Score: 3 Votes (Like | Disagree)
Read All Comments

Saturday May 30, 2020 4:00 pm PDT by Eric Slivka
Apple today doubled the price for upgrading the RAM on the entry-level 13-inch MacBook Pro, with customers in the United States now being charged $200 to move from 8GB to 16GB compared to the previous $100 upgrade price. Similar increases are seen in other countries, such as moving from €125 to €250 in Germany and from £100 to £200 in the United Kingdom. Current pricing on RAM upgrade for ...
Read Full Article • 315 comments

Tuesday June 2, 2020 1:31 am PDT by Tim Hardwick
Apple Music has cancelled its Beats 1 radio schedule for Blackout Tuesday and is suggesting that listeners tune in to a radio stream celebrating the best in black music. Blackout Tuesday is a campaign organized by the music industry to support Black Lives Matter after Minneapolis citizen George Floyd was killed by police in the course of his arrest. On launching Apple Music, many users...
Read Full Article • 404 comments