Alongside new iPhones, Apple at its September event also unveiled a new 10.2-inch iPad, which became available for pre-order on September 10 and is set to start shipping out tomorrow.

The updated ‌iPad‌, which continues to be Apple's most affordable at $329, is similar to the sixth-generation ‌iPad‌ but comes equipped with a larger 10.2-inch screen, an upgrade over the previous model. 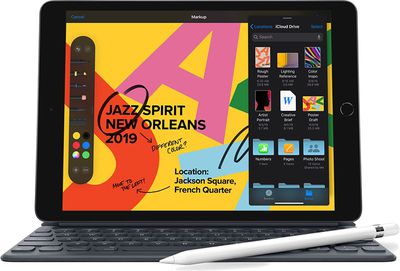 It features the same A10 Fusion chip that was used in the sixth-generation, along with Apple Pencil support, but new this year is a Smart Connector that allows it to work with a Smart Keyboard, which is sold separately for $159.

The new ‌iPad‌ continues to feature a 7-megapixel rear camera, a one-pound body, Touch ID, and thicker bezels than some of Apple's other more expensive iPads, but it's price can't be beat.

The new ‌iPad‌ begins shipping out to customers on Wednesday, September 25, and Apple says it will be in stores later this week with launch dates in retail locations varying by country and region.

Apple originally said the new ‌iPad‌ would be in stores on September 30, so it appears to be rolling out a bit earlier now that iPadOS has had an early release.

Pricing on the seventh-generation ‌iPad‌ starts at $329 for 32GB of storage, with 128GB of storage available as well as LTE options. Pricing for schools and educational customers is even lower, starting at $299.

Customers who purchase an ‌iPad‌ will get a free year of Apple TV+ when ‌Apple TV+‌ comes out this November.

Spock
I think pencil support, better processor, slightly bigger screen and a fresh battery, I can deal without the laminated display and finally replace my iPad Air 2. I just don’t use the iPad enough to justify spending anymore than this so it’s perfect for me.
Score: 4 Votes (Like | Disagree)

iapplelove
These new iPads are going to sell amazingly well. At that price point you can’t go wrong.
Score: 3 Votes (Like | Disagree)

Sorry to hear that. You should consider buying a proper TV...

Define a "proper" TV...between this and a "proper" computer when referring to the iPad or a "proper" camera when referring to the iPhone Pro, I hear a lot of self-appointed gatekeepers who need to stretch outside their comfort zone and realize that that sort of nomenclature means absolutely nothing in this day and age. It does however keep the salespeople at the Best Buy or Dixon's employed and off the streets, so there's that, I guess.
Score: 3 Votes (Like | Disagree)

Sorry to hear that. You should consider buying a proper TV...

Can't take a TV with me to the backyard, to bed, on a trip, or to the bathroom.Don't want that big clunky thing in my house.
Score: 3 Votes (Like | Disagree)

gugy
It doesn't take much to realize if Apple have fair prices they will sell tons of more hardware.
Score: 2 Votes (Like | Disagree)

Caliber26
I really wish they would’ve bumped the processor this time around. I’d love the slightly larger screen but I can’t justify upgrading from my 6th gen to this one just for that.
Score: 2 Votes (Like | Disagree)
Read All Comments