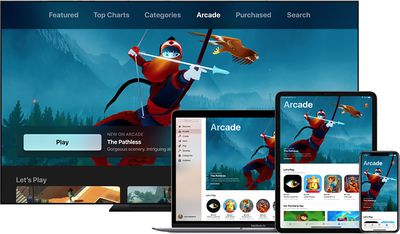 Beta testers and developers took to Twitter to share the news in the early hours of this morning, although it's still unclear whether the gaming service is rolling out to all Apple set-top boxes running the Golden Master candidate, or just those in certain locations.

As the image below demonstrates, ‌Apple Arcade‌ on Apple TV features a native interface optimized for television screens, and currently sports a 'Try it Free' button promoting the service's one-month free trial available to everyone.

Games on ‌Apple Arcade‌ are supported by Made for iPhone game controllers along with PS4 and Xbox controllers, and Apple has built controller support into tvOS 13, so users won't need to rely on the Apple Remote to get playing.

The service's launch on tvOS is also hotly anticipated because ‌Apple Arcade‌ supports multiple platforms, so you'll be able to start a game on, say, your ‌iPhone‌, and then swap over to ‌Apple TV‌ without losing your place.

When ‌Apple Arcade‌ first became available, there were just over 50 games available, but more titles have already been rolling out. Apple says that new ‌Apple Arcade‌ titles will be coming out on a weekly basis, with at least 100 games in the works.

‌Apple Arcade‌ is priced at $4.99 per month, and allows up to six family members to access games through Apple's Family Sharing feature. It's currently only available on ‌iPhone‌, but will officially roll out to iPad and ‌Apple TV‌ when the public releases of iPadOS and tvOS 13 arrive on Tuesday, September 24. A Mac launch is likely to arrive in October. For more information, check out our dedicated Apple Arcade guide.

I’m not gonna lie, I completely forgot about Apple Arcade. I either don’t care or live under a rock.

Play What The Golf. It might change your mind.

Gonna buy Xbox controller in a few days and hopefully play Sayonara on Apple TV at the end of the month and see if it's on par with console.
Score: 3 Votes (Like | Disagree)

So I can use a ps4 controller ?

Is every Apple Arcade game required to run on Apple TV (or all supported platforms)?

Yes. The game selection in Apple Arcade will be identical on iOS, iPadOS, tvOS, and macOS.
Score: 2 Votes (Like | Disagree)

I wonder when the tvOS 13 official release is going to drop. I’ve got my DualShock 4 v2 ready to go. Bring on Oceanhorn 2!

Probably the same time as iPadOS (around 10am PST) so give it a shot! I was able to access Apple Arcade after midnight yesterday and it worked perfectly!

Play What The Golf. It might change your mind.

Gonna buy Xbox controller in a few days and hopefully play Sayonara on Apple TV at the end of the month and see if it's on par with console.

My only issue with WTG were the gyro levels (I was playing on my iPad) and I swear to god I want to murder the car level more than anything. I’m stuck on the crown for a par level where I have to race other cars. I know I’ll eventually get it but it’s made me both switch to my phone and want to throw my damn phone across the room. Otherwise I couldn’t love the game more, but these levels I HATE
Score: 2 Votes (Like | Disagree)

Apple needs to launch a game pad to show that they intend to be serious on the gaming scene. The compatible PS4 and XBox should just be an awesome bonus

Anyone know if they're going to handle multiple users? "Continuing saves on your TV" sounds great and all, but there are 5 people in my house.

"Access for up to six family members" is what Apple has posted on their Apple Arcade page.
Score: 1 Votes (Like | Disagree)
Read All Comments