iFixit's iPhone 11 Teardown: 'An iPhone XR With Some iPhone 11 Pro Tech Inside' 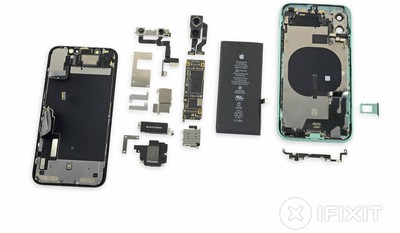 The repair site reiterated what has been said previously about the ‌iPhone 11‌: it's essentially an iPhone XR, but with a few internal upgrades from the new ‌iPhone 11‌ Pro family. There's a double-decker logic board, upgraded wide and ultrawide camera lenses, and what iFixit believes to be ultra wideband antenna technology embedded into the rear case.

Otherwise, the teardown doesn't reveal much unknown information about the ‌iPhone 11‌. iFixit delved into the device's rectangular battery, which is only marginally improved upon last year's ‌iPhone XR‌ battery. The ‌iPhone 11‌ has a 3,110 mAh battery, measuring about 7 percent more compared to the ‌iPhone XR‌ and accounting for the one hour battery increase that Apple claimed in its keynote.

The ‌iPhone 11‌ earned a repairability score of 6 out of 10. iFixit said that the display is easier to replace than in other smartphones, but the site bemoaned Apple's continued use of proprietary screws and an increased chance of breakage due to glass on the front and back of the ‌iPhone 11‌.

keysofanxiety
Still waiting for the iFixit teardown of the Apple Card...
Score: 21 Votes (Like | Disagree)

In other words it’s more an Xr S than successor to the Xs.

I don't think anyone thought the iPhone 11 was a successor to the XS.
Score: 17 Votes (Like | Disagree)

ItsGavinC
Wonderful phone. Upgraded from an X (my battery life was getting terrible) and I don't regret it at all. I was worried about going back to an LCD screen, and the resolution, but it's totally fine for me. Love the better battery life, love the slightly larger screen, size of the phone is great for me, can't tell a difference in screen resolution when using apps, etc. Got a 64 GB because I use iCloud for photos and music. So yeah, I got the cheapest new iPhone and I'm very happy with it.

Last year was the first year I haven't upgraded (have every iPhone since the original except for an XS).
Score: 9 Votes (Like | Disagree)

I'm not a big fan of my new $750 phone being referred to as "entry level". It's like I own the Toyota Yaris of phones... and in reality I feel like it's a 4runner with a good set of options. :p

If people you don’t know & will never meet, referring online to the $699 phone you purchased as “entry level” bothers you- go ahead & spend the $300 more for a Pro.
Probably MUCH cheaper than hiring a therapist to help unpack why you would care in the slightest.
Score: 5 Votes (Like | Disagree)

I'm not a big fan of my new $750 phone being referred to as "entry level". It's like I own the Toyota Yaris of phones... and in reality I feel like it's a 4runner with a good set of options. :p

-DMN-
The iPhone 11 seems like such a great compromise that I’m seriously considering upgrading from my iPhone SE...?
Score: 3 Votes (Like | Disagree)
Read All Comments

Friday May 7, 2021 1:51 am PDT by Tim Hardwick
An early look at an ongoing analysis of Apple's App Tracking Transparency suggests that the vast majority of iPhone users are leaving app tracking disabled since the feature went live on April 26 with the release of iOS 14.5. According to the latest data from analytics firm Flurry, just 4% of iPhone users in the U.S. have actively chosen to opt into app tracking after updating their device...
Read Full Article • 166 comments