iFixit this morning did a quick teardown of the iPhone 11 Pro to provide a brief look at the new smartphone's internals, and now the site is in the process of doing a much deeper dive through an iPhone 11 Pro Max teardown.

The repair site is just now digging into the iPhone 11 Pro Max, but has already found signs of the bilateral wireless charging feature that was rumored ahead of launch but ultimately not announced. 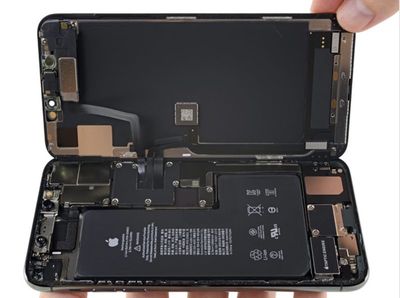 The iPhone 11 Pro teardown found two battery connectors in the new iPhones, which is a first, and further investigation by iFixit suggests the extra connector is a direct line to the wireless charging coil.

With the phone powered on, we disconnected the lower battery connector and the phone stayed on and charged via the Lightning port, but not over wireless charging. Seems this extra connector is a direct line to the wireless charging coil, which could be an important feature for bilateral charging!

What's more, when we reconnected the cable, our phone displayed a momentary temperature warning before returning to normal. We suspect it lost contact with an important battery temperature sensor and shut itself down; this sounds a lot like a reverse wireless charging heat management feature to us.

Bilateral wireless charging would have allowed the new iPhones to wirelessly charge devices like the AirPods, the Apple Watch, and even other iPhones. It was an expected feature for much of the 2019 rumor cycle, but just before the new iPhones launched, rumors indicated Apple had decided to pull the feature.

It's not entirely clear if bilateral wireless charging is something that can be implemented at a later date if the hardware is in place, or if that's Apple's plan, but as of now, there is no two-way wireless charging option despite the hints of it in the ‌iPhone 11‌ Pro and Pro Max.

iFixit has also discovered a "new mysterious board" sitting below the battery that could be related to bilateral wireless charging.

The teardown so far has also revealed a slimmed down logic board to make room for the triple-lens camera setup and similar adhesive to last year's iPhones despite new water resistance ratings.

iFixit is going to be working on its ‌iPhone 11 Pro Max‌ teardown for the next few hours. Those interested can follow along on the teardown page for updates, and we'll also update this article when new details are shared.

Update: According to iMore's Rene Ritchie, bilateral inductive charging wasn't pulled from the ‌iPhone 11‌ because it was never slated for production to begin with. Ritchie says there is no hardware in ‌iPhone 11‌ models that would allow such a feature to be enabled later.

Update: It’s my understanding bilateral inductive charging wasn’t pulled from the iPhones 11. It was never slated for production and there isn’t anything in there that could be enabled later. (It would also be dumb to ship it without Watch support...) https://t.co/vXQxM4T3Yf — Rene Ritchie (@reneritchie) September 21, 2019

There is absolutely no need whatsoever to have a pair of cables to do reverse charging. The power management circuit that connects to the charging coil would be responsible for current flow into (reverse charging) and out of (charging the phone itself) the coil.

You can see this in tear downs of Samsung phones where there are no additional cables or hardware required for the reverse wireless charging function to work.

So they see something new and they assume it's for reverse charging because they simply don't know.
Score: 17 Votes (Like | Disagree)

Only Apple can literally ship an unfinished product and sale it by the millions.. and fix it later lol

Apparently you've never bought a game in the past 20 years.
Score: 11 Votes (Like | Disagree)

People who repair devices or do tear downs shouldn't pretend they're electrical engineers.

But they are electrical engineers.

Chaos215bar2
If only there were three connectors, it would be a sure sign of an imminent Half Life 3 release.
Score: 6 Votes (Like | Disagree)

You really think the videos are the product of just the people shown on screen? Do you also think Craig Federighi alone designed iOS 13 because he was on stage?

I'll trust an electrical engineer's opinion over your "simple reason."

Funny, I haven't seen any "electrical engineer" make a claim about wireless charging requiring extra battery cables. Can you point me to that source?

I work in a related field (designing electrical components for automotive). My comments aren't based on "simple reason" - they are based on my understanding of how modern devices are constructed and the types of power management circuits they employ.

Curious, what's your background? How can you tell if someone describing the operation of an electronic device is telling the truth (or making assumptions) unless you also have a similar background?
Score: 6 Votes (Like | Disagree)

If there wasn't intended to be bilateral charging, Apple wouldn't have made a thicker phone with greatly increased battery size.

One could argue if they intended it to to do bilateral charging they would have announced it and stated it will come at a later .X release like they have in the past. But as @Falhófnir stated they may not have announced it to avoid embarrassment like the AirPower fiasco. All we can do is wait, while some jackass files a class action lawsuit for being secretly sold hardware he/she didn’t pay for.
Score: 5 Votes (Like | Disagree)
Read All Comments