Slack today launched dark mode for all desktop apps, including Mac, Windows, and Linux. This follows the company previously making dark mode available on iOS back in June. 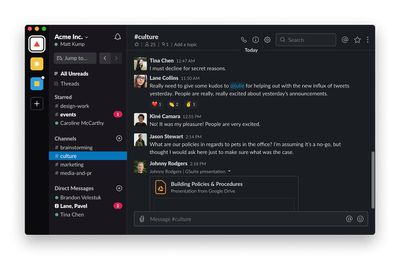 To find dark mode in Slack on Mac, click on your name in the left sidebar > Preferences > Themes. This will show you a quick preview of how everything will look, and then you can choose to switch to dark mode or stay in light mode.

The company has also added new themes specifically tailored for dark mode, all of which are also available today. There is no required update to see dark mode on Slack, but you'll need to restart the app to get it to appear.

Slack also confirmed that in the near future you will be able to set Slack to switch automatically between light and dark mode, based on your macOS settings. The company didn't provide a specific release date for this feature but said it will be available fairly soon.

sharprichnorth
There's no "Themes" under Preferences. Latest version on Slack's site is 4.0.3, which was released August 28.

[edit] Moments after I posted that, Slack flashed (reloaded) and Themes appeared. Just have to wait, I guess. Still v4.0.3.

For such an integral app, their development has always felt unusually slow.

It's also got some usability issues. Largely the result of being a "fake" (Electron?) app, most likely.
Score: 4 Votes (Like | Disagree)

Mac App Store shows updated 1w ago... no option for dark mode?! Whatever.

No, it's the Mac app as well. You need to quit and relaunch if its been running.
Score: 2 Votes (Like | Disagree)

For such an integral app, their development has always felt unusually slow.

Welcome to the joy of Electron-based apps. Just don't open Activity Monitor on the memory tab..
Score: 2 Votes (Like | Disagree)

Pakaku
I wish these dark modes would add some actual depth and organization... to me their layout just looks like a bunch of text with no boundaries or anything. And that's not getting into using anything besides pure black and white... at least Discord tried a decent dark theme attempt
Score: 2 Votes (Like | Disagree)

I was struggling to find dark mode even after reinstalling the app. If you're on Windows, this means you'll need to close the app and kill the task in Task Manager, then reopen.

Welcome to the joy of Electron-based apps. Just don't open Activity Monitor on the memory tab..

Slack has worked hard to improve resource usage on the Mac lately, and I'm super happy with the progress that they have made. Interesting that the "Slack Helper" process takes up nearly 3x the memory as the Slack app itself. How is that helper helping me??? :p
Score: 2 Votes (Like | Disagree)

Mac App Store shows updated 1w ago... no option for dark mode?! Whatever.

It's in the app now too under preferences.
Score: 1 Votes (Like | Disagree)
Read All Comments