Could Apple be about to announce that it's making Disney movies available in 4K format on Apple TV? Earlier this morning, MacRumors forum member Eminemdrdre00 spotted a 4K badge on the Aladdin banner in the carousel of the iTunes Movies app on his Apple set-top box. But when he selected it, the reference disappeared.

However, a Reddit user has since uploaded several images of Disney movie selection screens on iTunes – including several Marvel titles – all of which bear the 4K and Dolby Atmos badges. However, these references appear to have since been pulled.

When Apple said in 2017 that it had inked deals with all the major Hollywood studios to sell 4K movies on ‌Apple TV‌ 4K, Disney was the one notable holdout. 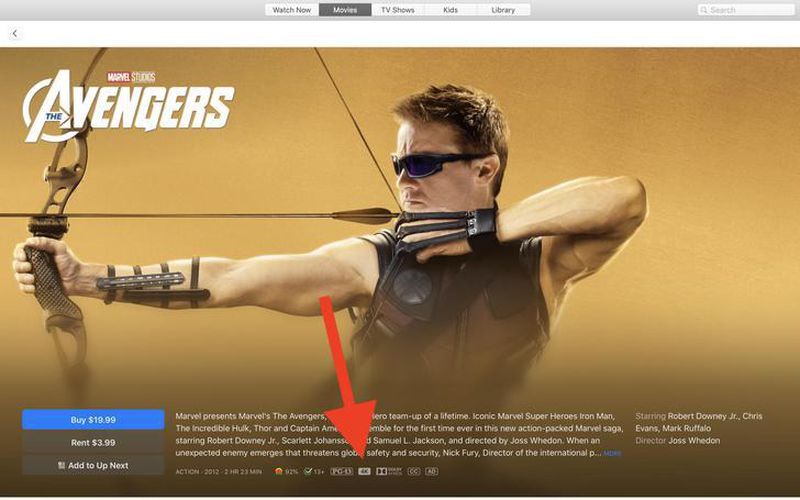 Perhaps an agreement has now been reached, although this would be all the more surprising given that both Apple and Disney are about to go head to head with their own rival streaming services.

Disney+ is set to launch on November 12 and will be available to watch on ‌Apple TV‌ (tvOS-supported models), iPad, and iPhone, with offline downloads supported on mobile. Rumors suggest Apple is also aiming to launch ‌Apple TV‌+ this November. 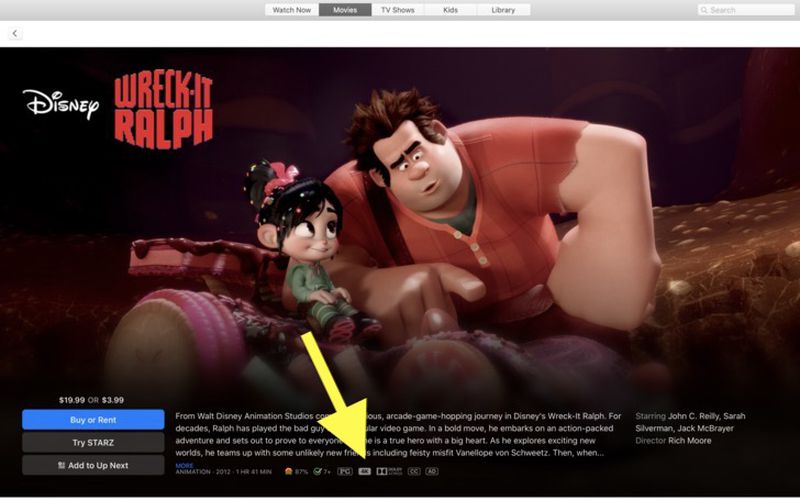 Disney+ will cost $6.99 a month and give subscribers the ability stream up to four devices at the same time, with high-definition 4K content included at no extra cost.

‌Apple TV‌+ will offer all of Apple's original TV shows and movies that are in development, and Apple is reportedly spending upwards of $6 billion for content. Little is known about ‌Apple TV‌+, but it will be available on all devices where the TV app is available when it launches.

Apple is widely expected to announce new ‌iPhone‌ and Apple Watch models at its event later today, and last-minute rumors suggest there could be a new Apple TV with an A12 chip as well, although the timing is unclear.

The event kicks off at 10:00 a.m Pacific Time. MacRumors will be providing live coverage of the event both here on MacRumors.com and on the MacRumorsLive Twitter account.

truthertech
"Perhaps an agreement has now been reached, although this would be all the more surprising given that both Apple and Disney are about to go head to head with their own rival streaming services."

You misunderstand the nature of their relationship, and what Apple is trying to accomplish with their streaming service. Apple and Disney aren't "going head to head." Disney's CEO, Bob Iger, sits on Apple's Board of Directors and intimately understands Apple. Cook and Iger see their businesses as complementary. That's why, unlike Netflix, Disney agreed to have a channel on Apple TV and give Apple a cut. Indeed, don't be surprised if Apple announces a bundle with Disney today.;)

Moreover, you're making the mistake people make over and over that in order for Apple to succeed, others must fail. When Jobs came back to Apple he shared his epiphany that Apple had to realize that it wasn't necessary for Microsoft to fail for Apple to succeed. Not understanding this is why so many pundits are consistently wrong in their predictions. They think that Apple has to be #1 in sales of a product to be successful, e.g., sale of phones, most music subscribers, most smart speakers sold, etc., when that's never Apple's goal. No, Apple TV Plus is all about adding value and hence some revenue to the Apple ecosystem, not being the most watched or beating Disney, etc.
Rating: 4 Votes

Disney has been dragging it's heels on this, wanting to charge users 25$ for 4k movies but Apple wouldn't allow a price go above 19.99. Every company has been selling 4k for 19.99 and Disney was being greedy.


Disney also wanted to build in VHS Playback Simulation whereby the quality of the movie would decrease every time it was watched so that parents of children would need to pay for multiple copies
Rating: 4 Votes

cardfan
Why would you be surprised? Again Apple isn’t going into battle with Disney. Apple thinks of Disney+ as a channel to sell in its atv app. Apple stands to make 2 dollars from every Disney sub it sells.
Rating: 3 Votes

Will Disney upgrade all of our movies for free is the question? I bought so many marvel movies I’ll be pissed if I have to rebuy everything


I'd say it will be a free upgrade or nothing at all. But given that Apple gives you 4K rights to a 4K code that was redeemed in MA, they should technically know the Disney films in your collection that were redeemed in 4K in MA as well, therefore the potential to give you 4K to those films is there....
Rating: 2 Votes

jose86ec
Now it makes sense why some of the Disney films are available today in 4K.

FaustsHausUK
Of all the things to accuse Disney of, leaving money on the table is not one of them. Purchases do not eat into streams - the reverse is true - but there are many of us who prefer the stable bitrate of a downloaded file vs a stream. We're an additional revenue source.
Rating: 1 Votes

Pretty sleazy tactic if that's true, and that did happen to me a lot when I was a kid, makes total sense now ;-)
Rating: 1 Votes

Odd move to make their competitors products better as they are launching their own streaming platform.


Or Disney know that there will be some who would prefer to buy their films from an iTunes or Vudu over subscribing to their digital service so have now decided to fall in line with Apple's pricing so that every digital provider has their films available to buy in 4K.
Rating: 1 Votes

Or Disney know that there will be some who would prefer to buy their films from an iTunes or Vudu over subscribing to their digital service so have now decided to fall in line with Apple's pricing so that every digital provider has their films available to buy in 4K.


Probably right. It's just if it was me, I'd give my streaming platform exclusivity to encourage subs.
Rating: 1 Votes
[ Read All Comments ]