Disney+ Will Offer up to Four Simultaneous Streams and 4K Content for $6.99 a Month

Disney's annual D23 Expo kicked off in Anaheim on Friday, and the company has revealed more details about its upcoming streaming service, Disney+. 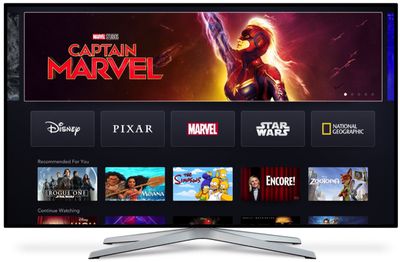 According to CNET, Disney+ will cost $6.99 a month and give subscribers the ability stream up to four devices at the same time, with high-definition 4K content included at no extra cost.

Of course, Netflix has built up a large library of content in its nine years operating as a streaming service, but Disney has a huge stock of established IP to draw from and is launching its platform with more than 500 feature films and over 7,500 shows, including the entire Pixar library and a raft of original content.

The company is debuting a Ms. Marvel series on the platform, as well as She Hulk and Moon Knight. A live-action Lady and the Tramp adaptation and an Obi-Wan Kenobi original series starring Ewan McGregor will also be exclusive to Disney+.

Other previously announced perks include numerous Star Wars series like The Mandalorian, several Marvel character shows, and exclusive streams for upcoming Disney movies including Frozen 2 and a live-action The Little Mermaid.

Disney's original episodes will be released weekly, in contrast to Netflix's tendency to release entire seasons in one go, and subscribers to the service will be able to set up to seven different user profiles (Netflix allows up to four).

Disney+ is set to launch on November 12 and will be available to watch on Apple TV (tvOS-supported models), iPad, and iPhone, with offline downloads supported on mobile.

This holiday season is shaping up to be all about the battle of the streaming platforms, with Apple TV+, Apple's new streaming television service, also expected to launch in November.

‌Apple TV+‌ will offer all of Apple's original TV shows and movies that are in development, and Apple is spending upwards of $6 billion for content. Little is known about ‌Apple TV+‌, but it will be available on all devices where the TV app is available when it launches.

Apple has not yet announced pricing for the service, but it is ad free and shows will be available to watch on demand. Current rumors suggest it could be priced at $9.99 per month.

This is very cool. It will certainly give Netflix headaches. Competition is good.

I think it will give more headaches to Apple with their overpriced service with very little content
Score: 126 Votes (Like | Disagree)

Loyalty4Life
This is very cool. It will certainly give Netflix headaches. Competition is good.
Score: 47 Votes (Like | Disagree)

Agit21
Im sold. Disney+ is going to be the most successful streaming service.
Score: 32 Votes (Like | Disagree)

I don't think Apple bet their company on TV+. It's just one service. Netflix on the other hand..
Score: 27 Votes (Like | Disagree)
Read All Comments