Ahead of the upcoming iPhone event that's set to kick off tomorrow, some Apple Store locations will have their windows blocked off with black curtains in order to make changes to the front window displays.

Twitter user Brian Roemmele yesterday tweeted a teaser about the upcoming change, and Bloomberg's Mark Gurman explained in another tweet that Apple is planning to bring back "the old-school 3D front windows" at some store locations.

Reason: It’s because they’re bringing back the old-school 3D front windows at some stores. Here are some old examples. I liked these. https://t.co/IQBbFF0tCn pic.twitter.com/LxhBlTUo65 — Mark Gurman (@markgurman) September 9, 2019

An Apple retail employee contacted MacRumors and confirmed Gurman's report. Apple Store workers recently practiced putting up the black curtains and were also instructed to clean out and fix floor mechanisms that haven't been used in years. This likely includes wires and other equipment used for anchoring the front displays.

Apple previously used intricate, eye-catching window displays with cutouts and designs showing off new products and features, but the practice was discontinued with the launch of the updated Apple Store designs. 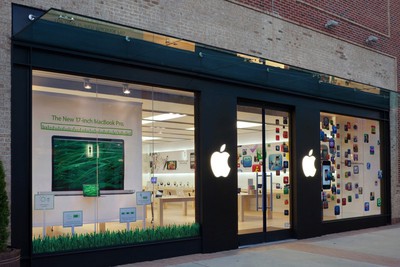 Former ‌Apple retail‌ chief Angela Ahrendts and Jony Ive worked on the updated Apple Stores, but Ahrendts has since departed and Ive is set to leave the company at the end of the year, which is perhaps why Apple is now prepared to make some changes. Deirdre O'Brien, Apple's head of people, has taken over the company's retail initiatives.

Apple frequently changed its window display setups back when it used window displays, and many of the designs are still well known, such as the colored balls used for the ‌iPhone‌ 5c launch.

In some stores that have seen redesigns, it's not clear how the new window displays will work, but it looks like many retail store displays will soon get more interesting to look at.

Lobwedgephil
Man, thought we were getting a 17 inch MacBook Pro again for a second.
Score: 27 Votes (Like | Disagree)

Logic368
I am SO ready for a retro Apple (retro being, in my mind, a throwback to the mid 2000’s). Truly the golden era of Apple, where they weren’t afraid to make fun niche products, such as the iPod Shuffle. There was a time when Apple products really were fun! Where you felt excited to have an iPod or an iPhone in your pocket. It’s gotten so clinical over the years. Ive’s flat design plus Arendts making the stores “fashion designer” locations. Isn’t there a happy medium between 3D everything and completely flat? Isn’t there a way to make the products themselves trendy instead of relegating that to colorful cases? What the heck is the point of making the most beautiful product in the world just to cover it up in rubber?!

Really hoping we get back to the good ol’ days.
Score: 18 Votes (Like | Disagree)

iReality85
The current Apple Store design comes off as a little too sterile. I mean, it's nice and all, but Apple needs to have some fun with colors and decorations again.
Score: 11 Votes (Like | Disagree)

panjandrum
I sure hope this signals the beginning of the end of flat, grey, hard to see UIs with tiny or non-existent controls and an excess of minimalism (is minimalism even minimalism anymore when it is extreme, or does that just make it another form of excess?) I just want things to be usable, visible, and functional again.
Score: 8 Votes (Like | Disagree)

AtomicDusk
Man, I loved these so much. Some of the installations were awful (looking at you snow globe) but by and in large it was always wonderful to put up and see the fruits of your labor in the front of the stores.
Score: 8 Votes (Like | Disagree)
Read All Comments

Monday July 13, 2020 6:50 am PDT by Joe Rossignol
Earlier this year, Apple agreed to settle a U.S. class action lawsuit that accused the company of "secretly throttling" older iPhone models. Now, eligible iPhone owners are beginning to be notified about their legal rights and options. Under the proposed settlement, Apple will provide a cash payment of approximately $25 to each eligible iPhone owner who submits a claim, with its total payout ...
Read Full Article • 117 comments