Qantas Airways, for example, told Bloomberg that all 15-inch MacBook Pro models are banned from checked luggage and must remain switched off for the duration of the flight. That ban applies not only to machines with faulty batteries, but also perfectly fine MacBook Pro models not subject to recall. 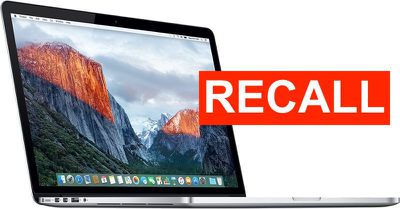 Virgin Australia, meanwhile, has banned "all Apple MacBooks" from checked luggage, requiring customers to put their MacBooks in their carry-on luggage.

Singapore Airlines and Thai Airways have both posted warnings on their website letting customers know that affected 2015 15-inch MacBook Pro models cannot be brought on board at all unless those models have received a replacement battery.

At the beginning of August, the European Union Aviation Safety Agency issued warnings to aircraft operators reminding them that affected 15-inch MacBook Pro models with faulty batteries should be kept switched off during flight.

The United States Federal Aviation Administration gave similar warnings to U.S. airlines, reminding them of recall rules that prevent affected MacBook Pro models that have not received replacement batteries from being placed in checked luggage. United Airlines, one of the major operators in the U.S., asks passengers not to use affected models during flight.

Apple launched a voluntary recall and replacement program for 2015 15-inch MacBook Pro models sold between September 2015 and February 2017 as the models contain batteries that can overheat and pose a fire safety risk.

Apple has been offering free replacement batteries since June and a 15-inch MacBook Pro that has had a battery repair is no longer in danger of overheating and can be safely used on airplanes and other locations.

Unfortunately, there is no easy way for an airline to determine what year a MacBook Pro is from (though there is an online serial number check) and further, whether it's had a battery replacement, which is leading to confusing rules on MacBook Pro usage that vary from airline to airline. Difficulty checking model numbers also makes it hard to enforce bans, and it's not clear how strict each airline is with the rules, which could lead to some non-banned models being flagged.

Customers who have a 15-inch MacBook Pro from 2015 who have not replaced the battery should contact Apple immediately for a free replacement. Apple sold approximately 432,000 potentially affected units in the United States, along with 26,000 in Canada.

Tim Cook is the reason for decreased iPhone sales, NOT people not willing to upgrade.

Wake UP shareholders. Good lord. The guy is not CEO material.

Umm, sorry but maybe I am an outlier. I upgrade when my iphone doesn't do what I want with no hitches. Has NOTHING to do with who the CEO is.
Score: 53 Votes (Like | Disagree)

palmerc2
Ok, real talk....who in their right mind would put their MacBook Pro (or any laptop or tablet) in check-in luggage? Are you begging for a broken screen, or in rare cases risk losing it all together?
Score: 29 Votes (Like | Disagree)

Tim Cook is the reason for decreased iPhone sales, NOT people not willing to upgrade.

Wake UP shareholders. Good lord. The guy is not CEO material.

Shareholders have been very happy under Cook. Ask me how I know.

Investors are no longer worried about iPhone sales because we understand the company and its new direction after building such a vibrant user base and serviceS/wearables businesses thanks to Tim Cook.

Just because some airlines decided to overreact and ban stuff that’s not even problem, doesn’t mean there is some crisis at Apple. This is limited to a specific model year.
Score: 27 Votes (Like | Disagree)

blasto2236
Don’t most airlines require anything with a lithium ion battery to be carried on and not checked? Pretty sure that’s the case.
Score: 26 Votes (Like | Disagree)
Read All Comments