Apple this morning started accepting pre-orders for its Powerbeats Pro wireless headphones in Ivory, Moss, and Navy on its online Apple Store. 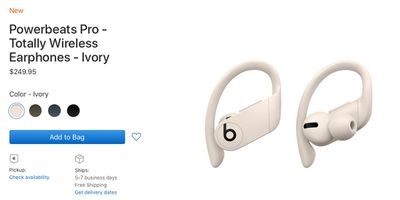 Apple is currently quoting shipping times of 5 to 7 business days for the Ivory and Navy headphones, which loosely corresponds with Apple's plan to make the new Powerbeats Pro colors available in retail stores from August 30. The Moss color currently ships in 1 to 2 weeks. The new colors are also available to order at the Beats By Dre website, which is quoting the same shipping times.

Apple started selling ‌Powerbeats Pro‌ in May after introducing them in April, but the black color was the only one available at launch. Apple said that it would make the other colors available at a later date.

‌Powerbeats Pro‌ are a wire-free version of Apple's popular fitness-oriented Powerbeats earbuds. Like the AirPods, ‌Powerbeats Pro‌ feature a dedicated charging case that offers 24 hours of battery life and an H1 chip for fast connectivity to your devices, device switching, and Hey Siri support.

$250? Really? And reviews say they sound very similar to the Powerbeats 3...I bought a few pair of those recently for $30 each used like new...$30 vs $250 is a no brainer to me...Be smart people, buying this only tells Apple their prices are spot on

All the reviews I’ve seen mention better sound quality than the Powerbeats 3 and AirPods.
Score: 5 Votes (Like | Disagree)

your point makes zero sense. Eight tips in the box but you can’t test them with the tips? Are you allergic to the material used in the tips?

Your post makes zero sense. He's saying that you can effectively test them out in store (before purchase), because they don't give you the tips to try (which makes sense, as who wants to try on headphones with tips that 100 other people have shoved in their ears). But, since you don't have access to the tips before purchase, you can't effectively test them out for fit and sound. His post makes perfect sense...
Score: 5 Votes (Like | Disagree)

calstanford
Funny how these plastics can be coloured at will while Airpods are unable to be anything but ugly in-your-face white
Score: 3 Votes (Like | Disagree)

willnpc
$250? Really? And reviews say they sound very similar to the Powerbeats 3...I bought a few pair of those recently for $30 each used like new...$30 vs $250 is a no brainer to me...Be smart people, buying this only tells Apple their prices are spot on
Score: 3 Votes (Like | Disagree)

Yes and no. Apple BT headset devices got so good I had to buy the airpods. The convenience is amazing. However, it did take a few years to get me to make that plunge. On the subject of favorite headsets: I personally find my QC 35 ii to be amazingly, excellent as they can be worn for many, many hours in utter comfort with great sound quality and excellent noise cancellation. However these are so much an individual choice as to preferences and what is great, comfortable and sounds good.

I haven't moved on, I embraced the loss of a headphone jack. But I do use my wired earpods in the gym as I don't care if they get wet from sweat.

Maybe one day I'll buy the powerbeats pro, however, staring at 5 BT headsets plus earpods, I'm set for a while.

Like I mentioned, I get it that some people find that convenience trumps other factors. That's always been the case - different strokes for different folks. My thorn of a complaint remains: Apple did not need to get rid of the phone jack to accommodate bluetooth folks. Phone jacks never stood in the way of bluetooth, nor vice versa. Bluetooth devices will work with my LG V40 just as well as with an iPhone, and also produces great sound for wired devices. These features don't have to be mutually exclusive. By removing the jack, Apple greatly enhanced its Bluetooth device market for folks still willing to buy the jackless phones (and now iPads). My 6S+, with phone jack, delivers Bluetooth just like the phones with no jack. Apple has embraced, over the last five years, two basic trends with their devices - thin and small, minimalist use of ports (inclusive of the jack). I have not been able to embrace that philosophy, and as Apple has gone exclusively thin and minimal, esp. with laptops and iOS devices, other brands have stepped up to fill the void, certainly in hardware offerings. Once my 2017 iPad Pro and my 6S+ finally die, I'll somewhat regrettably be out of the iOS fold. With great improvements in Linux and PC laptops over the same five year period, leaving Mac laptops hasn't been so painful. Still have an iMac desktop, only two years old (from which I'm now typing), so we'll see what comes after it.

BTW, the Bose bluetooth headphones have gotten good reviews - I'd choose something like that or perhaps the Sennheiser HD1's if I went the wireless route. The Senn's have pretty low impedance (18 ohms), not sure about the QC 35II. I'm guessing - maybe I'm wrong - that bluetooth devices generally have low impedance due to battery restrictions for power. With wired over-the-ear headphones, I generally keep between 50 and 100 ohms for extensive travel - that's a realistic limit for use with smart phones without using an external DAC. The Beyerdynamic headphones I mentioned above - 150 ohms - don't work well with phones. They're great with laptops with good audio software. Sorry this has been long winded.
Score: 3 Votes (Like | Disagree)