Just weeks away from its annual September event, Apple has filed several unreleased iPhone, Apple Watch, and Mac model numbers with the Eurasian Economic Commission today, according to filings uncovered by MacRumors. 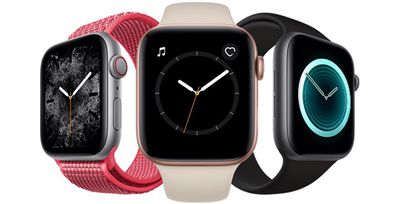 All of those ‌iPhone‌ models except A2296 and A2298 were previously filed in May as running iOS 12, and have now been updated to reflect that they are running iOS 13, while the Apple Watch listings have never been seen before.

As for the Mac, 11 model numbers have been filed, but all of them have either been released or were already filed in June as running macOS Mojave and have merely been updated to reflect macOS Catalina. At least one of these models could certainly be the 16-inch MacBook Pro rumored to launch this fall.

The filings do not reveal specific product names, so we cannot confirm details like whether the Apple Watch models are considered Apple Watch Series 5 models, but new models of some kind are evidently coming. Leaked assets from watchOS 6 recently revealed upcoming titanium and ceramic Apple Watch finishes.

The new ‌iPhone‌ and Apple Watch models will very likely be unveiled in September, while the new Macs will likely arrive in October or later.

There are also some already-released products on the list that have been filed as running Apple's latest operating systems, including various older ‌iPhone‌, iPod touch, Apple Watch, MacBook Air, and MacBook Pro models.

Eurasian Economic Commission filings like these have foreshadowed the release of new Apple products on numerous occasions, including multiple iPad, iPad Pro, ‌iPhone‌, Mac, Apple Watch, and AirPods models. The filings are legally required for any encrypted devices sold in Russia and select other countries.

macgabe
The new watch will make a constant tick tock sound. No-one knows why but legend has it this is a reference to something ancient time pieces used to do.
Score: 6 Votes (Like | Disagree)

The new watch will make a constant tick tock sound. No-one knows why but legend has it this is a reference to something ancient time pieces used to do.

I wish it would be true./s

Have any one in your family ever owned a tall-case clock (aka. "grandfather" clock)?
My family did, a German Gustav Becker, last-century, Arts&Crafts tall-case clock.

The tick-tock I heard on a quiet evening was always soothing. And its quarter- and hourly-chimes are now missed as well. This is something we have lost in the digital age.

[The saying is that the cadence of the tick-tock replicates the mother's heart to the unborn.]
Score: 2 Votes (Like | Disagree)

Would it though? I personally don't see any hardware area where the S4 critically needs an update. Yes, a larger battery would be nice, but the S4 SoC seems to have all the power it needs for the moment and the new screen sizes seem to be generally well-received.

Jason Snell just posted an opinion piece on Macworld ('https://www.macworld.com/article/3433276/why-apple-doesnt-need-to-release-a-new-apple-watch-this-fall.html') noting he feels Apple does not need to release a Series 5 watch next month and I am in agreement with him.

I certainly am not in the market to replace my Series 4 and I would not be surprised if most felt the same. I understand those on an earlier Series who skipped S4 would prefer to go to an S5 rather than get an S4 now and have "lost" a year should a fundamentally better S5 come out in Late 2020 (which I kind of don't see happening - I see the S5 being a refinement of the S4 as the S3 was to the S2).

Offering a ceramic Watch Edition S4 would offer an upgrade path for those with S2 or S3 Watch Editions who are now multiple years on their current watch, so that makes sense. And titanium might appeal to those on earlier Series who would like something more durable than aluminum, but do not like the weight of stainless steel.
Score: 2 Votes (Like | Disagree)

That was exactly my thought. In which case I will not upgrade from my Series 2 yet.

Some Wikipedia research to share for my own benefit below. I'm not seeing a noticeable trend in their model numbers... but I'm hoping someone else has better insight here.

I think that's what is going to happen.

What exactly do you want in Series 5? The 4 was a huge upgrade and outside of battery life (Apple seems fine with 18 hours) and always on display (I've finally stopped caring about this).

Looks like Series 4 till 2020 with new case options and bands of course. I'm more excited to find out the pricing for the Ceramic and Titanium versions.
Score: 1 Votes (Like | Disagree)

I think that's what is going to happen.

What exactly do you want in Series 5? The 4 was a huge upgrade and outside of battery life (Apple seems fine with 18 hours) and always on display (I've finally stopped caring about this).

Looks like Series 4 till 2020 with new case options and bands of course. I'm more excited to find out the pricing for the Ceramic and Titanium versions.

Do you think they would call it a Series 4S or something similar? I just don't see this happening since it breaks the trend (albeit the "Series" trend came out of nowhere too). I'm honestly 99% set on upgrading from my Series 2 regardless of features, just to ensure I have the higher resale value of the new "5" vs. the 4.