Microsoft today announced the launch of a beta version of its upcoming Microsoft Edge browser, which is available today for Windows and macOS users.

Previously, the Microsoft Edge browser was available as a preview build, but Microsoft has now graduated to an official beta. Microsoft's beta channel represents more stable software than the preview channel. 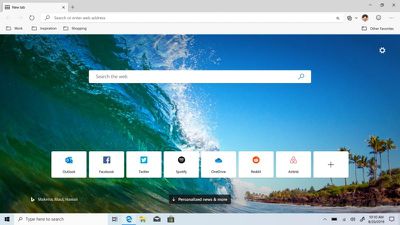 Microsoft has said that its aim with Microsoft Edge is to create better web compatibility with better performance for customers while making sure there's less fragmentation of the web for web developers. During the preview period, Windows and Mac users downloaded Edge more than a million times, and Microsoft received more than 140,000 individual pieces of feedback to improve the browser.

The beta version of the Edge browser features new personalization options, such as tab page customization, dark theme support, and extensions from the Microsoft Insider Addons store or other Chromium-based web stores like the Chrome Web Store.

Microsoft is also expanding its Microsoft Edge browser security program to the beta channel, offering rewards of up to $15,000 for the discovery of high-impact vulnerabilities.

The new Microsoft Edge beta can be downloaded for free from the Microsoft website. There's still no word on when the Edge browser will see a launch, but it's likely there will be a few more months of beta testing before that happens.

nutmac
For what it's worth, I greatly prefer Microsoft Edge over Google Chrome. Essentially the same app minus Google creep features.
Score: 15 Votes (Like | Disagree)

What a sad day for the World of web development...

Why would you say that?
There is no proprietary features like the old IE days.
Its compliant with all current web standards.
Score: 10 Votes (Like | Disagree)

Why would you say that?
There is no proprietary features like the old IE days.
Its compliant with all current web standards.

It's not so much about browser standards compliance, it's more that the most popular rendering engine (Blink, used by Chrom/e/ium, Opera and now Edge) is effectively controlled by a non-neutral party. Sure, it's "open source", but ultimately Google calls the shots.

It's also worth mentioning, Chrome is bloated with a huge amount of non-standards, some of which Google utilises to give it an advantage over other browsers when using Google products. Use YouTube in Chrome, then try running it in Firefox - you'll see different behaviours.

I strongly discourage anyone from using Chrome, there are better browsers available - especially on the Mac. While I'm sure Microsoft will be carrying out data collection too, I trust Microsoft with my data a lot more than Google.
Score: 10 Votes (Like | Disagree)

Why would you say that?
There is no proprietary features like the old IE days.
Its compliant with all current web standards.

It's also more monoculture, though.

These days, "web standards" are largely whatever Google deems worthy of pushing through the consortium. They 'conveniently' already have a working implementation, and the W3C has basically given up on a proper standardization process, instead calling HTML a "living standard". It's gotten a lot harder for Mozilla and others to compete.

(The story is more complicated than that, and Microsoft sure isn't innocent, but yes, losing a browser engine is a net loss.)
Score: 9 Votes (Like | Disagree)

roland.g
Downloading Edge on a Mac would be like voluntarily asking to be injected with a disease or virus, and not in a vaccine method approach.
Score: 6 Votes (Like | Disagree)

No thanks, I keep Safari.

Edge runs like crap on my work computers, crashes continuously.

Then your IT Department sux.
My team maintains a 10,000+ users network. Everyone uses Edge, no crashes or odd issues.
Score: 6 Votes (Like | Disagree)
Read All Comments