Microsoft today announced the launch of a preview or canary build of its Microsoft Edge browser designed for the macOS operating system. 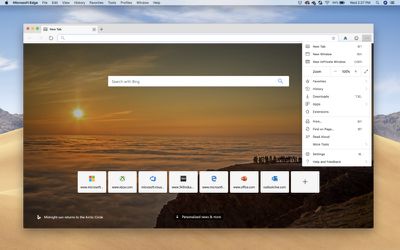 Microsoft first unveiled plans to bring the Microsoft Edge browser to the Mac at its annual Build developer conference in Seattle, held on May 6. Shortly after, a canary version of the browser appeared on Microsoft's site, but it was not made officially available until today.

According to Microsoft, Edge on the Mac will be quite similar to the Edge experience on Windows, but with "user experience optimizations" to make it "feel at home on a Mac." The overall look and feel of the browser will be tailored to match "what macOS users expect" from Mac apps.

Examples of this include a number of tweaks to match macOS conventions for fonts, menus, keyboard shortcuts, title casing, and other areas. You will continue to see the look and feel of the browser evolve in future releases as we continue to experiment, iterate and listen to customer feedback. We encourage you to share your feedback with us using the "Send feedback" smiley.

Exclusive user experiences for macOS are also coming in the future, such as "useful and contextual actions" for the Touch Bar on Touch Bar-compatible Macs. Trackpad gestures will also be supported.

To use the new macOS version of Microsoft Edge, a Mac running macOS 10.12 or later is required.

johannnn
I assume they’re spending resource on this for a good reason. Why should I use this instead of Safari or Chrome? Does Microsoft have their own bookmark sync etc? Tight interaction with OneDrive? Are they pushing users to Bing (which is ******)?

I have a Mac in corporate, but I always use Safari first, and then move to Chrome if the site is ****** coded and don’t work properly in Safari. When and why should I launch this browser?
Score: 8 Votes (Like | Disagree)

I always use Safari first, and then move to Chrome if the site is ****** coded

I do the same, but use Brave instead of Chrome. I don’t want Flash. Also, why give Google the business?
Score: 4 Votes (Like | Disagree)

I do the same, but use Brave instead of Chrome. I don’t want Flash. Also, why give Google the business?

Just because we're Apple fans doesn't mean you have to hate Google. I use Chrome first, Safari second because I am forced to use a PC at work and need something cross-platform.
Score: 4 Votes (Like | Disagree)

moabal
Hasn't this been out for a few weeks already? I have it installed.
Score: 4 Votes (Like | Disagree)

Firefox is BLAZINGLY fast on iOS with their new under the hood improvements.

Firefox under the hood on iOS IS Safari. This is the placebo effect on full display.
Score: 4 Votes (Like | Disagree)

...So it is essentially Chrome, but without the Google stuff and telemetry.... (Still using Safari first though.)

Yeah, no need to give Microsoft my stuff and telemetry instead of Google.

Safari / Firefox and Vivaldi for me.
Score: 3 Votes (Like | Disagree)
Read All Comments