Apple Music will be available to stream on German Echo devices via Alexa from today, reports regional tech blog ifun.de. 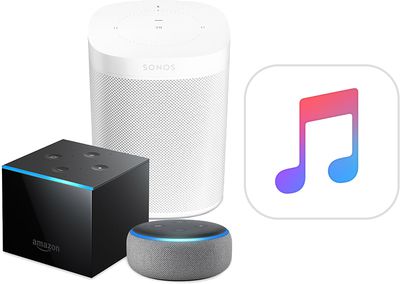 We've not received official confirmation, but if Germany's Alexa rollout follows a similar pattern to other countries, it should mean ‌Apple Music‌ subscribers who own an Echo device, Amazon Fire TV, or Alexa-enabled Sonos speaker will soon be able to ask Alexa to play songs, artists, playlists, and more from ‌Apple Music‌.

This functionality first launched in the United States in December of last year before expanding to the United Kingdom, Ireland, Australia, New Zealand, and Japan.

Read our guide on how to set up Apple Music in the Alexa app, including how to make it the default music service so that you don't have to say "on ‌Apple Music‌" each time you ask Alexa to play something.

Update: Alexa has also gained support for ‌Apple Music‌ in France, Italy, and Spain, according to local outlets iGeneration, iPhoneItalia, and Teknófilo.

Update 3: As of September 21, 2019, ‌Apple Music‌ support on Alexa is also available in Canada and India.

Now I can move to Germany.
Score: 3 Votes (Like | Disagree)

Json81
Geofencing gone wrong.
I'm giving money to spotify instead just because of this stupid limitation.
Score: 2 Votes (Like | Disagree)

Still not impressed this function isn’t in Canada yet. I got one for Christmas last year and finally got rid of it a few months ago because it never came, and it still hasn’t.

I really wonder what's holding this back. Clearly Apple is ok with offering Apple Music on Amazon devices and I can't imagine there are any licensing problems since it's just a speaker like any other you can play AppleMusic on.

I got an Echo Show for the bedroom because I like the idea of a screen with a summary of my day as well as a large clock on my bedside table. I'm using my Prime 30 day trial for music but that's going to run out soon. Would be so great if AppleMusic came to Echo devices in Canada soon.
Score: 2 Votes (Like | Disagree)

480951
Still not impressed this function isn’t in Canada yet. I got one for Christmas last year and finally got rid of it a few months ago because it never came, and it still hasn’t.
Score: 1 Votes (Like | Disagree)

Just checked on my Alexa App, but I do not see yet "Apple Music" as option under "linked service"....

Looks like you need to go to the Amazon website and active the skill there - it is not working via the Alexa App itself.
Searched for Alexa skill "Apple Music", activate and login to Apple with your ID and approve the link. Now Alexa App shows me "Apple Music".

What's the cuboid device shown in the pic?