PSA: Apple Email Asks Users Who Signed Up for Apple Card Invite to Provide Correct Apple ID, Even if They Did Already

Apple customers who registered their interest in gaining early access to Apple Card were left confused last night after receiving an email from Apple asking for their Apple ID, despite having already provided it. 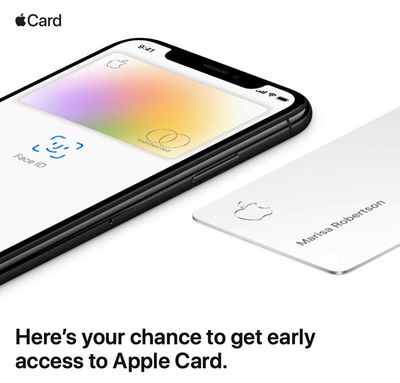 Since early August, Apple users have been signing up on Apple's website to be notified early about the release of ‌Apple Card‌. Apple has since sent out email invitations for an "Apple Card Preview" to some of those customers. However, it looks as though an error has cropped up in Apple's invite system as the second wave of customers starts to be processed.

The latest Apple email sent out to customers claims that their "early-access invitation is waiting," but that the email address they used when they originally signed up for an ‌Apple Card‌ invite doesn't match an existing ‌Apple ID‌ on record. The message reads:

You wanted to be one of the first to get Apple Card — a new kind of credit card created by Apple, not a bank. Good news: Here's your chance to experience Apple Card before everybody else, so you can help us get ready for the public launch. Your early access invitation is waiting, but we need your Apple ID to send it. The email address you provided does not match an Apple ID signed in to iCloud. Just complete a few simple steps so we can send your invitation.

The email then provides steps for the user to check their ‌Apple ID‌ on iPhone and re-enter it at www.apple.com/apple-card to ensure they get notified, after which "invitations may take up to 48 hours to arrive."

While it's important to stay vigilant and report phishing attempts to Apple, in this case the "Notify Me" link provided in the email checks out and the raw email headers show the sender address is genuinely from Apple.

There are multiple reports on Reddit of people receiving the email who are 100 percent sure they signed up with the correct ‌Apple ID‌ email address. MacRumors also received the email – we're also very confident the right address was used – which suggests an erroneous communication has been sent out to hundreds, if not thousands of users, causing initial excitement swiftly followed by bemusement.

Got my email to sign up for Apple Card today and it’s saying my iCloud email is incorrect yet it’s the one they emailed the invite to and the only iCloud account I’ve ever had in over a decade+. I saw on reddit lots ppl w same issue. Will it be fixed soon? @Apple @AppleSupport — TJ (@solongtj) August 14, 2019

Several users have contacted Apple Support, who are apparently aware of the issue and it has been forwarded to the ‌Apple Card‌ engineering team. Still, it's worth noting that some users may have also received the email for the right reason – because they didn't use the email address associated with their Apple account.

Needless to say, if you did sign up for the ‌Apple Card‌ invitation, make sure you used the proper ‌Apple ID‌ email address. If you can't remember whether you did or not, consider signing up again, otherwise it could delay your invitation by a few days.

Once customers receive their actual email invitation to the ‌Apple Card‌ Preview, they can sign up for ‌Apple Card‌ in the Wallet app on the ‌iPhone‌ or by going to Settings > Wallet & Apple Pay on the iPad.

‌Apple Card‌ is limited to the United States at the current time, but may expand to additional countries in the near future. Apple is already in talks with European regulators, and has trademarked ‌Apple Card‌ in Europe, Hong Kong, and Canada.

My Apple ID is a Mac.com email that Apple killed on me years ago when they wanted people to pay for email. So I’m sure I’d have this issue

Really? I’ve had my Mac.com email since 2001 with several aliases. I’ve never paid a cent. It still works perfectly just like my .me account and can use .icloud in the place of any of them.
Score: 15 Votes (Like | Disagree)

My Apple ID is a Mac.com email that Apple killed on me years ago when they wanted people to pay for email. So I’m sure I’d have this issue

Still rockin' my mac.com email since the beginning of time and have never had any issues with it
Remains my primary email to this day
Score: 11 Votes (Like | Disagree)

iapplelove
All this fuss cause of a credit card issued by Apple lol
Score: 9 Votes (Like | Disagree)

Well, the thing is it could have also been a pishing attempt. So this is legitimate information sharing if you ask me.
Score: 6 Votes (Like | Disagree)

blackhawk10
I have two Apple ID’s, one for iTunes and one for iCloud. This week I received Apple Card advance invitation sent to my iTunes Apple ID which didn’t work. (Apple Card is connected to Wallet on iCloud) So after after receiving the confusing above Apple email yesterday and entering my correct iCloud Apple ID...hopefully a correct invitation will arrive in 48 hours
Score: 3 Votes (Like | Disagree)

mikefj2004
Rec’d my email yesterday but I’m having the exact problem described in this article. I certainly am using the right email address but I got this email. I’m hoping Apple addresses this issue as soon as possible.