Apple Watch Was Number One Smart Watch in Q2 2019 With an Estimated 5.7M Units Shipped

The Apple Watch accounted for close to half of all smart watches shipped in the second quarter of 2019, according to a new report shared this afternoon by Strategy Analytics.

Apple shipped an estimated 5.7 million smart watches worldwide during the quarter, earning it 46 percent marketshare and its continued position as the number one smart watch company. 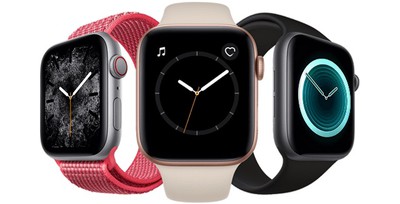 Apple shipped 5.7 million smartwatches worldwide in Q2 2019, rising an above-average 50 percent from 3.8 million in Q2 2018. Apple Watch remains a long way ahead of the chasing pack and its global smartwatch marketshare has grown to 46 percent this quarter, up from 44 percent a year ago. Apple Watch has fended off strong competition from hungry rivals like Fitbit. Apple remains the clear smartwatch market leader.

Apple does not break down Apple Watch sales, instead including Apple Watch revenue in a Wearables, Home, and Accessories category, so Strategy Analytics' numbers are estimates.

During Apple's recently earnings call for the third fiscal quarter of 2019 (second calendar quarter), Apple CEO Tim Cook said that wearables had an "absolute blowout" quarter with growth well over 50 percent. The Apple Watch set a new June quarter revenue record and reached millions of new users during the quarter.

No offense to the 7 people who own an iWatch, much like the 3 people who own the iHomePod, but is this even still a thing? I haven’t seen a single person wearing an iWatch in public. First, this thing would actually be useful if it was round. Don’t care if rectangle is more functional. Circle looks nicer. Second, no one cares about health. Americans are massively obese by choice. Stop shoving health in my face, stupid Apple. I like eating McDonald’s every day, that’s my choice, stop shaming me.

I've never seen an iWatch, but I've seen quite a lot of people wearing Apple Watches. There are many millions out there, not 7. You say it would be actually useful if it was round, but you admit rectangular is more functional? I'm not sure if you know how the words useful and functional relate to each other. "No one cares about health" sounds a lot like you projecting your opinion on everyone else - clearly, quite a lot of people care about health. I haven't heard Apple shoving health in your face or shaming you. If you feel threatened by seeing an ad somewhere, that's on you.
Score: 26 Votes (Like | Disagree)

I haven’t seen a single person wearing an iWatch in public.

How is it living under a rock?

I see them everywhere I go... everywhere. It was much different when the S0 launched; I felt like I had the only one for a long time. Right around the S1 they started to become much mire prolific IMO.
Score: 18 Votes (Like | Disagree)

JohnApples
Who wants to dig up the old posts from 2014/2015 where people we’re proclaiming the Watch would flop?
Score: 16 Votes (Like | Disagree)

I have always wanted to want one.

Once you have one you won't believe how handy it is!
Score: 14 Votes (Like | Disagree)
Read All Comments

Friday June 18, 2021 9:41 am PDT by Sami Fathi
After a long wait, YouTube for iOS is officially gaining picture-in-picture support, allowing all users, non-premium and premium subscribers, to close the YouTube app and continue watching their video in a small pop-up window. In a statement to MacRumors, YouTube says that picture-in-picture is currently rolling out to all premium subscribers on iOS and that a larger rollout to all US iOS...
Read Full Article • 163 comments

Friday June 18, 2021 11:36 am PDT by Juli Clover
With iOS 15 and macOS Monterey, Apple is adding several quality of life improvements, which are designed to address some of the complaints that people have had with these operating systems for years now. Subscribe to the MacRumors YouTube channel for more videos. In our latest YouTube video, we're highlighting some of our favorite "fix" features that address long-running problems in iOS and...
Read Full Article • 120 comments