DigiTimes: Apple to Launch MacBooks with Cellular 5G Connectivity in Second Half of 2020

Apple is working on a range of MacBooks with 5G cellular connectivity for launch as early as next year, claims a new report today by DigiTimes. 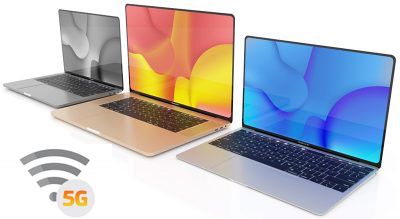 According to the hit-and-miss Taiwanese publication, Lenovo, HP, and Dell will kick off the 5G laptop market later this year, and Apple is set to follow with its own high-speed cellular notebook in the second half of 2020.

The English version of the DigiTimes story is currently paywalled, so the following details are based on a machine-translation of the same report on DigiTimes Taiwan.

‌DigiTimes‌' notebook supply chain connections claim that Apple has finalized its integrated 5G MacBook design and though it did so later than other vendors, its 5G transceiver offers higher efficiency and superior high-speed transmission rates than rival designs.

Apple is said to be achieving better 5G performance in its notebook designs through the use of a ceramic antenna board, which costs six times that of a regular metal antenna board but offers twice the transmission and reception efficiency. Another reason a 5G-enabled MacBook will be high-cost is reportedly down to the case: A metal chassis shields the 5G signal, meaning the notebook will require 13 to 15 antennas, where a 5G smartphone typically uses 11.

This is the first time we've heard anything about Apple planning to launch a MacBook or MacBook Pro with 5G, and ‌DigiTimes‌ has a mixed track record in relation to reporting on Apple's future plans, so it's best to treat its rumors with some skepticism until the info is corroborated by additional sources.

That said, Apple has explored the possibility of developing MacBooks with cellular connectivity in the past. Indeed, the company reportedly considered launching a MacBook Air with 3G connectivity, but former CEO Steve Jobs said in 2008 that Apple decided against it, since it would take up too much room in the case and would lock customers to a specific carrier.

Apple patent describing MacBook with integrated LTE
Despite retreating from the idea, Apple received approval for two patents in 2016 that would enable it to add LTE connectivity to its MacBooks. Both describe the use of an installed "cavity" antenna that runs parallel with the notebook's hinge which could be used for long-range communications such as cellular telephone bands. The patents also describe other uses including near-field communications (NFC), light-based wireless connectivity, satellite navigation, and more.

Indeed, Apple recently announced that it plans to acquire the majority of Intel's smartphone modem business, subject to regulatory approvals. The acquisition will certainly benefit Apple's cellular technologies team, but whether it will factor in on any plans for a series of 5G MacBooks remains to be seen.

Manzanito
I don’t know if it’s a feature I’d be willing to pay for. On the rare ocassions when I don’t have wifi available I just share my iPhone’s connectivity, which works like a charm.

I don’t have a problem with apple offering it, though, as long as it’s optional like the iPads.

eulslix
I wonder why Apple would do this though. Tethering through the iPhone works basically flawless and is another good selling point for their eco system lock in. Making their devices more autonomous seems to achieve exactly the opposite...
Score: 18 Votes (Like | Disagree)

vseera
2020 is going to the magical year Apple releases all its best gadgets!
Score: 15 Votes (Like | Disagree)

EugW
With an ARM SoC perchance?
Score: 14 Votes (Like | Disagree)

RogerWilco
On Lenovo, HP and Dell the 5G modem will be a $125 option. Apple will charge $500 for the same feature.
Score: 10 Votes (Like | Disagree)
Read All Comments