Ahead of the launch of its new flagship smartphone, the Pixel 4, Google has been sharing details on the device to get ahead of leaks.

The design of the Pixel 4 was unveiled in June, and today, Google offered up a look at some of the features that will be included in the new smartphone, including Face Unlock and Motion Sense.


Face Unlock is designed to unlock the Pixel 4 much like Face ID unlocks modern iPhones, and the Pixel 4 is even using a 3D sensing camera similar to the iPhone X and later.

There are two Face Unlock IR cameras, an ambient light/proximity sensor, a Soli radar chip that powers Face Unlock and other features, a dot projector, and a Face Unlock flood illuminator.

The Face Unlock feature on the Google Pixel 4 will support secure payments and app authentication, which is unique as most Android devices do not have a secure enough facial recognition system to allow it to be used for payments. 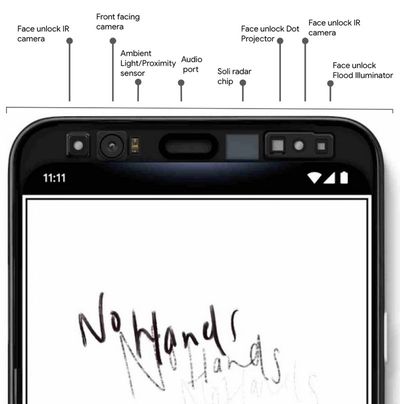 Google says that it is designing its facial recognition system differently than Apple's, making it a more fluid experience that works in any orientation.

Google suggests this is superior to other methods such as the ‌Face ID‌ unlocking sequence on iPhones. "Other phones require you to lift the device all the way up, pose in a certain way, wait for it to unlock, and then swipe to get to the homescreen," read's Google's blog post on the feature. "Pixel 4 does all of that in a much more streamlined way."

As with ‌Face ID‌, Face Unlock works on device, so no facial recognition data is shared with Google or Google services. Google says that face data is stored in the Pixel's Titan M security chip, which sounds similar to the Secure Enclave used in Apple's iPhones.

The aforementioned Soli radar chip is designed to sense small motions around the phone, which enables the sensors to activate when you reach for the device and also powers a new Motion Sense feature. Motion Sense will allow users to skip songs, snooze alarms, and silence phone calls by waving a hand in front of the phone.

Rumors have suggested that Apple is also working on iPhones that will incorporate touchless gesture controls for release in the future, though we've heard little about the feature and it's not known when iPhones with this functionality might launch.

As with Google's Motion Sense feature, rumors about Apple's work on gesture-based controls indicate that ‌iPhone‌ users would be able to navigate the operating system by moving their finger close to the screen without actually tapping it.

There's no official word on when Google will launch the Pixel 4, but past Pixel devices have come out in October, so it's likely that this year's launch will also be in October. That'll allow Google to release its new flagship device approximately a month after Apple unveils its new 2019 ‌iPhone‌ lineup in September.

"Other phones require you to lift the device all the way up, pose in a certain way, wait for it to unlock, and then swipe to get to the homescreen,"

Google, you didn't even try. On my Xs I have to:

So many steps, Pixel is better

BigDO
I see salt dispensation is in full swing already.

Google seems to be doing exactly what fans always commend apple on - take a good idea, and improve the execution.

For all thatbFaceID does right, it has shortcomings. I am very keen to see if Google can make it better.
Score: 35 Votes (Like | Disagree)

Yes, many comments on here about how Apple is better because they wait until they get it right before releasing something, but FaceID isn't it. It is nowhere near as fluid as TouchID, nor is it as fast. I have to manually type my passcode in far more on FaceID than I ever had to on TouchID.

And before people talk about it being so much more secure, show me where and who has cracked the TouchID protection, and why it is all of a sudden so inferior?

I have 2 Xs phones and they unlock faster than I pick them up. And if all I want to do is look at time or notifications, it locks again. No need to swipe or press a button to lock. Sorry, but this is way faster than touchID which I had to turn off the last phone I had. And I really don't want someone picking up my phone and have it unlock from a block away.

I'd suggest running through the recognition setup again and pay attention as it scans yo to make sure it sees all sides. I mean really, I never type my passcode anymore except after an update or restart.
Score: 28 Votes (Like | Disagree)

davenlm
Apparently it also can float in front of your face... That is an actual innovation!
Score: 21 Votes (Like | Disagree)
Read All Comments