Google today confirmed that its upcoming Pixel 4 devices will feature a square-shaped rear camera bump, a feature also rumored to be coming to the 2019 iPhones.

A case maker's mockup for the Pixel 4 smartphones leaked earlier this week, and today, Google confirmed the news itself in a tweeted image showing off the new design. 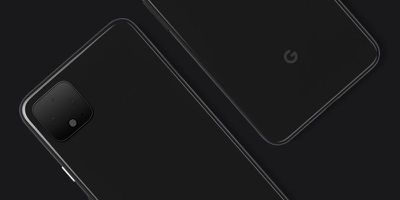 Well, since there seems to be some interest, here you go! Wait 'til you see what it can do. #Pixel4 pic.twitter.com/RnpTNZXEI1 — Made by Google (@madebygoogle) June 12, 2019

Google's rear camera setup appears to include two lenses, a microphone, a flash, and a "spectral sensor" at the top that accounts for things like light flicker when filming an LCD display.

Apple too is planning to use a square-shaped camera bump for its 2019 devices, based on leaked rumors, renders, and cases. Just this week we checked out some cases designed for the 2019 iPhone lineup that have large square cutouts to accommodate the new camera arrangement.

Based on leaked information, the three lenses in Apple's camera arrangement are set into a triangle shape. There are two lenses at the left as on the current flagship iPhones, along with one lens in between them set off to the right and a flash above that.

Google's setup, meanwhile, has the two lenses for its camera arranged horizontally with a flash at the bottom. Both of these setups provide more space between the flash and the lenses and there may be other benefits to square-shaped arrangement that both companies are taking advantage of.

Apple is expected to launch its 2019 iPhones in September, while Google's are also rumored to be coming in the fall. Historically, Google's new Pixel phones have come out in October, so while Google has beaten Apple to the punch officially showing off a square-shaped rear camera design first, Apple's 2019 flagship smartphones should launch first.

AngerDanger
Apple: What if the rear cameras were housed in the ugliest squ—

bladerunner2000
Put in a headphone jack. It hurts no one and pleases many.
Score: 28 Votes (Like | Disagree)

JGIGS
Here come all the copying post. AS long as you going to refer to it as copying Huawei Mate 20 and not calling it copying Apple we cool. Also make sure when Apple releases there square camera you all call that copying as well.

Only fair right? Otherwise please just don't post anything to do with copying for all our sanity? Please?
Score: 28 Votes (Like | Disagree)

bartszyszka
I think the comments about copying have an overly simplistic view of how manufacturing works. These components aren't created in a vacuum for one single company. The industry as a whole moves in certain directions and companies like Apple, Google, Samsung figure out how to incorporate new types of components into their products. Obviously it also works the opposite way, the companies that use the components also drive the creation of new ones and put pressure on the manufacturers to come up with new advancements.

If the technology to create fingerprint sensors for cellphones is maturing enough for Apple to use in their phones, it's not like other manufacturers aren't also looking into the technology, aware that it exists, also developing the technology themselves, possibly showing it off at industry trade shows, also looking for ways to incorporate it into other company's cellphones. Some components are also made directly by companies like Samsung, who make their own phones, but also produce components for Apple...

I'm sure it's a similar set of complicated circumstances driving the creation of these square-shaped camera sensors. It happened with companies regiggering how they produce front-facing camera sensors to fit into a notch. They're not just going to sit idoly and continue to product ones that require a forehead and not refine their technology to move in the direction the rest of the industry is moving.
Score: 18 Votes (Like | Disagree)

JGIGS
They didn't copy Apple. Apple hasn't even released a phone with a square camera yet. Just because their leaks came out first? The Huawei mate 20 already exist with a square design so they are both copying Huawei. How do you completely ignore that part of my post?

You're funny. ios neveeeeerrr takes from android eh? How about their notification's? Quick toggles now for wifi and bluetooth in command center? I really don't care who copies what I just want the best usability for the devices I own. If whatever the copying is, is legal what do I care as a consumer?

Bring me my crown Jester.
Score: 15 Votes (Like | Disagree)
Read All Comments