Apple has several original TV shows in the works for its upcoming Apple TV+ streaming service, and a new report by The Wall Street Journal looks at the big budgets involved in these productions as competition hots up among rival streaming services eager to win over audiences in a market dominated by the likes of Netflix and HBO. 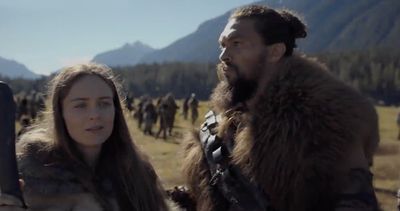 In the case of Apple's "See," the cost has neared $15 million for each roughly 60-minute episode, according to a person familiar with the matter. That is more than the cost of a typical independent feature film.

"See," set centuries in the future after a virus has wiped out much of Earth's population and left survivors blind, appears to be taking cues from the "Game of Thrones" playbook of cinematic world-building. Footage shown at Apple’s programming event featured Mr. Momoa ready-set for battle alongside dozens of actors in sweeping vistas filmed in the fields and forests of British Columbia.

These kinds of figures per episode mean shows can easily exceed $150 million per season – or as much as a typical big-budget movie. One driving factor, according to the report, is that high-profile TV shows are offered up next to theatrical films available to stream on the same service, so "original programming can't risk looking like B-material next to the movies."

Apple is working on dozens of original TV shows and movies with high-profile directors, producers, and actors. The company was reported to have a budget of about $1 billion for its original content and TV shows in 2017.

It's unclear if Apple's budget has risen since that time, but as the WSJ report concludes, a certain power comes with paying big money for A-list actors, since it signals to other top actors and directors that Apple is committed to writing big checks for its top shows.

For example, Apple has signed a deal for two seasons of morning talk show drama "The Morning Show," starring Reese Witherspoon and Jennifer Aniston. According to a report in January 2018, the two key stars are set to earn $1.25 million per episode.

‌Apple TV+‌, Apple's new streaming television service, is coming this fall. It will be available on all devices where the TV app is available, which includes iPhone, iPad, iPod touch, and Apple TV, along with the Mac. There's no TV app for Mac right now, but Apple plans to introduce one later this year.

Apple has not yet announced pricing for the service, but it is ad free and shows will be available to watch on demand. For more information on ‌Apple TV+‌, make sure to check out our Apple TV+ guide.

radiology
Apple is about to learn a hard business lesson...
Score: 17 Votes (Like | Disagree)

It will fail. This is a lot of money spent on something they’ve never done before.

Based on that logic, you would have predicted the failure of the iPod, iPhone and iPad too.

This isn't the Apple TV service we asked for......

When does Apple gives us what we ask for? LMAO
Score: 7 Votes (Like | Disagree)

BruceEBonus
Fifteen Million? That’s almost as much as a Mac Pro!
Score: 7 Votes (Like | Disagree)
Read All Comments