"See" has been described as an epic world-building drama set in the future, with little additional information available on the series at this time. Momoa will play the role of Baba Voss, a "fearless warrior, leader and guardian." 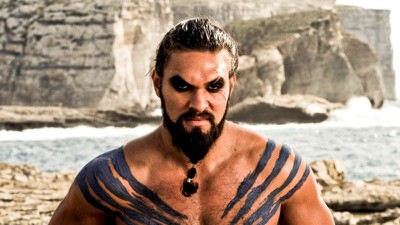 Image via HBO
Known for his role as Khal Drogo in the first season of "Game of Thrones," Momoa also stars in "Aquaman," coming out later this year. He's also had roles in "Justice League," "Braven," "Once Upon a Time in Venice," "Stargate Atlantis," and "Conan the Barbarian."

"See" was written by "Peaky Blinders" creator Steven Knight and it will be directed by Francis Lawrence, known for his work on "The Hunger Games: Catching Fire" and "Mockingjay."

"See" is just one more than a dozen original television shows that Apple has in the works. It's not clear when the first of Apple's TV series will launch, but rumors have suggested the shows could start debuting in March 2019.

Apple is said to be considering launching a new streaming video service, which could potentially be bundled with an Apple Music subscription and a digital magazine and new subscription.

That’s a frightening photo-may you replace it with something less traumatising?

I have no confidence that Apple will make any shows worth watching.

People said this exact thing about Netflix and Amazon.
Score: 12 Votes (Like | Disagree)

iansilv
Some day Jason Momoa will play a "Timid weak-willed man who runs from fights and when he does fight, doesn't fight very well." And that will be Oscar material.
Score: 8 Votes (Like | Disagree)

dilbert99
I don't think any company should be allowed to have exclusive content. I have netflix which has some original content that I like. There are a few shows on some other networks that I would quite fancy and who knows this could be one of them. But it is unrealistic for the public to sign up for every service just to get one or two shows from each network.
Score: 3 Votes (Like | Disagree)

Eduardo1971
That’s a frightening photo-may you replace it with something less traumatising?

ersan191
You mean from Stargate Atlantis right? What is this 'Game of Thrones' - never heard of it.
Score: 3 Votes (Like | Disagree)
Read All Comments

Saturday May 15, 2021 11:08 am PDT by Juli Clover
Twitter has been working on some kind of subscription service since last summer, and Jane Manchun Wong, who often digs into new features coming in apps, has shared details on just what Twitter is exploring. Twitter's subscription service could be called Twitter Blue, and at the current time, it's priced at $2.99 per month. There will be a "Collections" section that allows users to save and...
Read Full Article • 85 comments