Back in 1976, Apple released its first computer, the Apple I. Over a span of about ten months, Apple co-founders Steve Wozniak and Steve Jobs produced about 200 of the computers and sold some 175 of them, making it a valuable collector's item that has fetched up to $905,000 at auction in recent years. 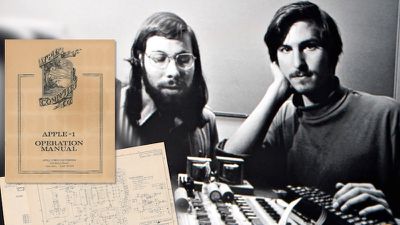 As a testament to just how rare the computer is, an "extremely rare" Apple I operation manual alone is estimated to fetch over $10,000 at auction this week, with a most recent bid of $9,422 on the Boston-based RR Auctions website.

The vintage manual features Apple's original logo on the front cover, which depicts scientist Isaac Newton seated beneath a tree with a shining apple dangling overhead. The manual explains how to set up and use the Apple I and its monitor and includes a fold-out schematic of the system.

"Very few of the original Apple-1 operating manuals—perhaps 65 or so—are known to exist today," said Bobby Livingston, Executive VP at RR Auction. He added that this makes the manual a "highly collectible piece from one of the most valuable and successful companies in the world."

Perhaps most interesting of all is the owner's message to prospective bidders:

I truly hate to sell it as The Manual is one of God's, I mean one of Woz's greatest gifts to nerdkind. Now I am not a greedy man and have enjoyed The Manual for nearly two decades, surviving two longer-than-they-should-have-lasted marriages and about 5 or 6 moves all over California. Alas, my time with this beautiful artifact has reached its end and I am now passing the torch to you.

Update July 11: According to RR Auction, the manual sold for $12,956 to a technology entrepreneur who wishes to remain anonymous.

Defthand
I think this button should fetch more money for its irony...

Crowbot
I love an Operations Manual that comes with schematics. The good old days.
Score: 12 Votes (Like | Disagree)

az431
You can get a free PDF of this manual at http://apple1.chez.com/Apple1project/Docs/pdf/AppleI_Manual.pdf
Score: 7 Votes (Like | Disagree)

You can get a free PDF of this manual at http://apple1.chez.com/Apple1project/Docs/pdf/AppleI_Manual.pdf

I'll print out the PDF, add some stains / yellowing to the paper, and put it up for sale discounted to $8K. What a bargain!

But seriously, $10K for an easily-reproducible paper artifact with no handwriting or signatures is a bit absurd.

ryanasimov
Every time I see that photo I think how perfectly it portrays their approach to the their business; Woz is staring at the circuit board and Jobs is peering directly at the camera (and thus the audience). Product focus vs. customer focus.
Score: 2 Votes (Like | Disagree)

That was Apple's style back then. Like Beagle Brothers, a small software house for Apple II's