Changes found in the latest iOS 13 beta, released to developers on Tuesday, suggest users may be able to transfer data between two devices over a direct wired connection when setting up a new device or restoring one from a backup. 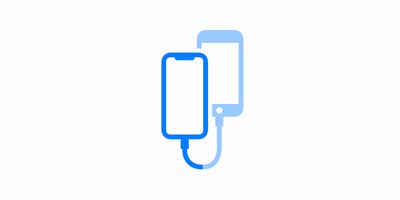 New graphic found in latest iOS 13 beta (Image via 9to5Mac)
As things stand, iOS users have two restore options in any device setup process. One requires them to download and install a backup stored on a computer via iTunes. The other involves using iCloud and wirelessly transferring data from an old device nearby to a new one logged into the same Apple ID.

However, new assets in the iOS 13 beta spotted by 9to5Mac's Guilherme Rambo include an icon that appears to resemble an iPhone with Face ID connected to an ‌iPhone‌ with Touch ID using a cable, indicating a direct wired transfer option will be available when setting up devices.

In addition, a related code snippet uncovered in the beta includes the user request, "Keep your other ‌iPhone‌ connected to this ‌iPhone‌ and connected to power until the transfer is complete," which perhaps refers to the use of a wireless charging mat during the direct transfer process.

It's unclear how any direct wired connection would work between two iPhones, since Apple doesn't sell a Lightning to Lightning cable that would enable such a physical link. Perhaps Apple intends to make such a cable available when iOS 13 is launched to the public in the fall.

Another possibility is that devices in Apple's new ‌iPhone‌ line-up, expected in September, will replace the ‌iPhone‌ Lightning port with a USB-C port. Apple already offers Lightning-to-USB-C cables for connecting iPhones to newer Macs.

Smartass
You know what this means? New dongle!
Score: 24 Votes (Like | Disagree)

jayducharme
This does seem to indicate that future iPhones will have USB-C. I’m completely in favor of that. Most of their Macs have it, so it just makes sense. But if you can transfer data simply by connecting one device with another (albeit with Face or Touch ID), I wonder if someone will figure out how to hack the security measures.
Score: 11 Votes (Like | Disagree)

Shirasaki
So in iOS 5, we cut the wire. 8 years later we figure out wire is just better than wireless?
That’s why I still prefer iTunes restore over iCloud restore (if I have only one Apple ID).
Score: 10 Votes (Like | Disagree)

YaBe
Looks more like a migration tool from old model (with home button and faded to decipt old) to a newer model ....
Score: 10 Votes (Like | Disagree)

johnnyenv
Or it could be to allow control of an unresponsive phone that has no home button.
Score: 9 Votes (Like | Disagree)

The idea they would only keep Lightning is for licence revenue stream proves that they only care about profit and not the customer. If it took stupidity to remove the 3.5 mm port, maybe they can have courage and nix lightning already.

Lightning is better than usb-c. It’s smaller, it doesn’t loosen over time, and nobody needs super high throughput for a phone. The idea they would only keep lightning for license revenue is a paranoid delusion you have pulled out of thin air. They’d actually make more money if they switched to usb-c, since most people would replace their immense collection of lightning cables and usb-a bricks with apple-branded usb-c bricks and cables.
Score: 7 Votes (Like | Disagree)
Read All Comments