A new feature in the latest iOS 13 beta makes users appear as if they're looking directly at the camera to make eye contact during FaceTime calls, when actually they're looking away from the camera at the image of the other person on their screen. 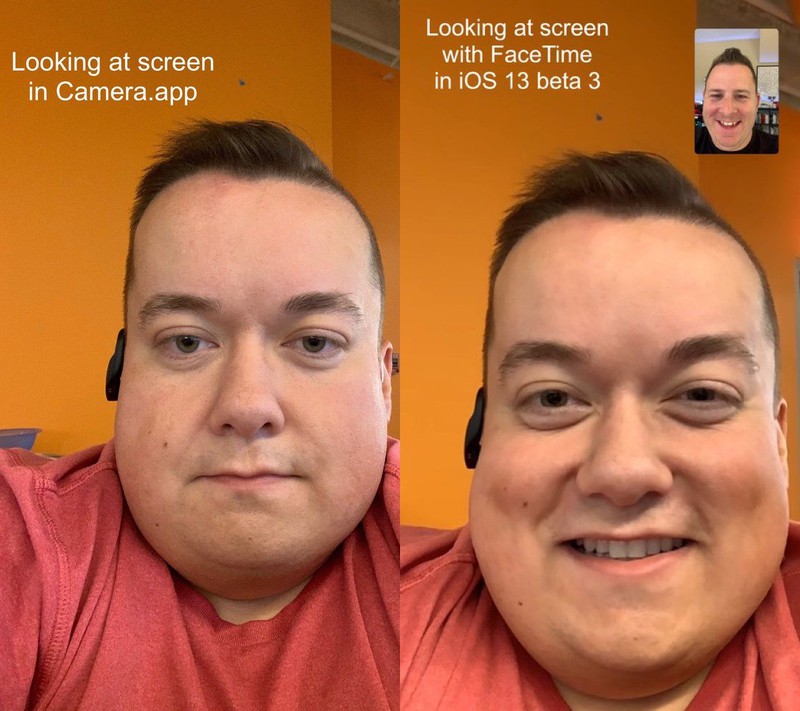 The ‌FaceTime‌ Correction Feature as demoed by Will Sigmon (@Wsig)
The new "‌FaceTime‌ Attention Correction" feature, first spotted by Mike Rundle on Twitter, can be turned on and off in the ‌FaceTime‌ section of the Settings app, although it only appears to work on iPhone XS and XS Max devices in the third ‌iOS 13‌ beta sent out to developers on Tuesday.

Why the feature is limited to these devices right now remains unknown. It clearly relies on some form of image manipulation to achieve its results, so maybe the software algorithms require the more advanced processing power of Apple's latest devices.

Rundle predicted in 2017 that ‌FaceTime‌ attention correction would be introduced by Apple in "years to come," but its apparent inclusion in ‌iOS 13‌, due to be released this fall, has surprised and impressed him.

For more details on the many features coming to iPhones with ‌iOS 13‌, be sure to check out our comprehensive MacRumors roundup.

Update: As demonstrated by Dave Schukin, the feature uses ARKit depth maps to adjust eye position to make it appear the user is looking at the camera.

How ‌iOS 13‌ ‌FaceTime‌ Attention Correction works: it simply uses ARKit to grab a depth map/position of your face, and adjusts the eyes accordingly. Notice the warping of the line across both the eyes and nose. pic.twitter.com/U7PMa4oNGN — Dave Schukin 🤘 (@schukin) July 3, 2019

nicho
Awesome and creepy at the same time.
Score: 53 Votes (Like | Disagree)

Remy149
I spend most FaceTime calls looking at myself in the corner lol
Score: 37 Votes (Like | Disagree)

The big question is, what comes next? Brave new world.

Looking at his expression on the left, mood correction?
Score: 35 Votes (Like | Disagree)

chrono1081
Sorry but this is a horrible comparison picture. I can't even tell what it's supposedly doing. My guess based on the description is that it "fixes your eyes" so to speak but the entirely different image between the two shots isn't very useful.
Score: 26 Votes (Like | Disagree)

JustSomeInfo
Now if they can only make it look like I'm there when I'm in the next room getting a snack.
Score: 20 Votes (Like | Disagree)

testcard
Not sure those images explain the feature very well at all.
Score: 17 Votes (Like | Disagree)
Read All Comments