LG recently came out with a new curved ultrawide monitor sporting a 5K resolution, a massive 49-inch display size, and a ~$1,500 price tag.

In our latest YouTube video, we went hands-on with the 49WL95C to see if it's a worthwhile purchase for a Mac user.

Subscribe to the MacRumors YouTube channel for more videos.
The 49WL95C display is similar to the 49-inch U4919DW Dell monitor that we took a look at earlier this year, and which turned out to be popular with MacRumors readers. Like the Dell monitor, the LG 49WL95C features thin bezels, a massive screen size and a deep curve.

There's an ambient light sensor at the top of the display, along with 10W speakers at the bottom of the monitor that are surprisingly loud. Adjustments can be made using the controls on the back of the right side, which is also where you'll find two USB-A ports and a 3.5mm headphone jack. 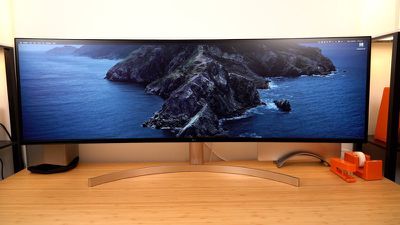 At the back, there's a single USB-C port that offers up to 80W of power for charging a MacBook, 2 HDMI ports, a DisplayPort, two additional USB-A ports, and a port for plugging in a power cable. The display has a built-in power supply, which means there's no bulky power brick to deal with, a definite plus.

The display's stand offers up full tilt, height, and swivel support, and we were impressed with the stand's build quality. It's a heavy duty stand, which is necessary since the monitor weighs in at 28 pounds. This is a huge monitor and will require a deep desk or a mounting solution to use.

LG designed the display with the expectation that buyers will be using it with multiple windows open at a time or two full screen apps rather than a single app taking up the entire 49 inches of display real estate.

You're not going to want to use this kind of display for gaming (due to the limited 60Hz refresh rate and no support for AMD's FreeSync or Nvidia's G-Sync), but it's good for those who currently use two 27-inch monitors and want something a little more seamless.

We tested the 49WL95C with a 2018 15-inch MacBook Pro, and we're not sure it's the best purchase for MacBook users. On a MacBook Pro (and a 2018 MacBook Air we also tested with) the maximum resolution we were able to get was 3480 x 1080p, which doesn't look great on such a massive display. Text, images, and other user interface elements just aren't crisp with the 1080p vertical resolution.

We tried a USB-C cable, a DisplayPort to USB-C cable, a Thunderbolt 3 dock, and an eGPU and weren't able to get the full 5120 x 1440 resolution. With an iMac Pro, though, we were able to run the display at full resolution over USB-C. It's probably also going to work well with the 2013 Mac Pro (or one of the new 2019 ‌Mac Pro‌ models, of course), but for Mac notebooks, we don't recommend it.

There have been other reports from Mac users who have also been unable to get the display to work at full resolution with their machines, while others have had no trouble at all, so it's not entirely clear what's going on.

There could be a graphics driver or other issue specific to similar Mac models preventing them from supporting the 5120 x 1440 resolution. If you have a Windows PC though, it works great. We had no problems with the Surface Book 2.

Let us know what you think of the 49WL95C display, and if you have one, whether you've been able to get it to run at the full resolution on a MacBook Pro or a ‌MacBook Air‌.

bpa1093
Will this screen be overkill for my cat videos?
Score: 24 Votes (Like | Disagree)

now i see it
I wonder how much the stand costs
Score: 16 Votes (Like | Disagree)

Juicy Box
That looks really cool, but sadly, I don't think that would fit my desk.

and we were impressed with the stand's build quality

macduke
Never thought I'd see a $1500 display and think it's a bargain, and yet here we are. Thanks, Apple.

Since it's not as high of a resolution relatively speaking, it could be great for gaming without having bezels in the center.
Score: 9 Votes (Like | Disagree)

Khedron
So that's a $500 display without the stand right?
Score: 9 Votes (Like | Disagree)

I assume sales of these ultra-wide monitors are driven by gaming, but are there really not enough people using monitors for things other than video consumption and gaming to justify producing monitors in anything other than increasingly wide aspect ratios?

Ultra-wides are also awesome when you work A LOT in shell windows and SQL databases -- and no, I am NOT kidding. Having a terminal window that can easily go beyond 132 characters width is extremely comfortable.
Score: 6 Votes (Like | Disagree)
Read All Comments

Wednesday January 19, 2022 11:30 am PST by Juli Clover
It's now been a few months since the M1 Pro and M1 Max MacBook Pro models launched in October, and MacRumors video editor Dan Barbera has been using one of the new machines since they debuted. Over on the MacRumors YouTube channel, Dan has shared a three month review of his MacBook Pro to see how it has held up over time and how it's changed his workflow. Subscribe to the MacRumors YouTube ...
Read Full Article • 172 comments