Apple has explored the idea of adding a camera to the Apple Watch, although not in the way one might expect. 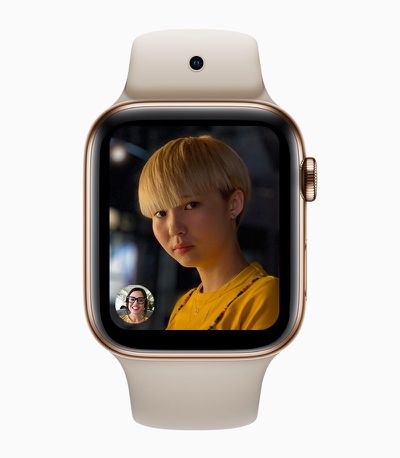 MacRumors mockup of Apple Watch with camera band
The U.S. Patent and Trademark Office today granted Apple a patent that describes an Apple Watch band with a camera or optical sensor affixed to the end of it. This would enable the Apple Watch to capture photos and video, with the Apple Watch's display serving as the viewfinder.

The band would be made with flexible materials, like many current bands, allowing the user to bend or twist it to aim the camera. Apple's patent includes various illustrations of how the band and camera could be positioned, including one where the camera hovers just above the Apple Watch's display.

A camera on the Apple Watch could enable basic photo capturing and FaceTime calls on the wrist. The patent also describes the possibility of multiple optical sensors, suggesting that a future Apple Watch band could have both front and rear cameras, allowing users to switch between views like on the iPhone.

Apple filed the patent application with the U.S. Patent and Trademark Office on September 16, 2016, a week after it unveiled Apple Watch Series 2 models. While both Series 3 and Series 4 models have launched without camera bands since then, Apple could certainly move forward with the idea in future models.

Apple files numerous patent applications every week, however, and many of the inventions do not see the light of day. Patents are also very detailed, encompassing many possible ideas, even ones that Apple might not have any plans to advance. So, the exact implementation if any remains to be seen.

Over the years, rumors have come and gone about the Apple Watch gaining a front-facing camera in the bezel above its display, but this has never come to fruition, perhaps because of the limited internal space available inside the device. A camera watch band is just one potential solution to that problem.

Friday June 24, 2022 2:52 am PDT by Hartley Charlton
Apple is "likely" to announce its long-rumored mixed-reality headset as soon as January 2023, Apple analyst Ming-Chi Kuo has reiterated. Concept render based on purported leaked information by Ian Zelbo In a detailed post on Medium, Kuo explained that Apple's headset will be a "game-changer" for the augmented-reality and virtual-reality market. Describing some of the headset's...
Read Full Article • 107 comments