Apple CEO Tim Cook delivered the commencement address at Stanford University today, sharing his thoughts on privacy, the need to always "be a builder," and how the loss of Steve Jobs made him learn the "real, visceral difference between preparation and readiness."


On the subject of privacy, Cook acknowledged that so many of our modern technological inventions have come out of Silicon Valley, but that recent years have seen "a less noble innovation: the belief that you can claim credit without accepting responsibility."

Cook stressed the importance of not accepting that we must give up privacy in order to enjoy advances in technology, arguing that there's much more at stake than just our data.

If we accept as normal and unavoidable that everything in our lives can be aggregated, sold, or even leaked in the event of a hack, then we lose so much more than data.

We lose the freedom to be human.

Think about what’s at stake. Everything you write, everything you say, every topic of curiosity, every stray thought, every impulsive purchase, every moment of frustration or weakness, every gripe or complaint, every secret shared in confidence.

In a world without digital privacy, even if you have done nothing wrong other than think differently, you begin to censor yourself. Not entirely at first. Just a little, bit by bit. To risk less, to hope less, to imagine less, to dare less, to create less, to try less, to talk less, to think less. The chilling effect of digital surveillance is profound, and it touches everything.

What a small, unimaginative world we would end up with. Not entirely at first. Just a little, bit by bit. Ironically, it’s the kind of environment that would have stopped Silicon Valley before it had even gotten started. 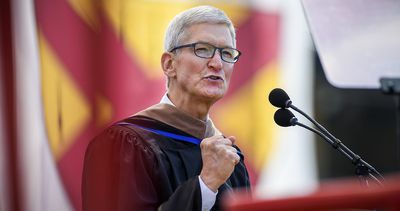 Image credit: L.A. Cicero/Stanford University
Shifting focus to the aspirations of today's graduates, Cook encouraged each of them to "be a builder," regardless of their chosen occupation.

You don’t have to start from scratch to build something monumental. And, conversely, the best founders – the ones whose creations last and whose reputations grow rather than shrink with passing time – they spend most of their time building, piece by piece.

Builders are comfortable in the belief that their life’s work will one day be bigger than them – bigger than any one person. They’re mindful that its effects will span generations. That’s not an accident. In a way, it’s the whole point. [...]

Graduates, being a builder is about believing that you cannot possibly be the greatest cause on this Earth, because you aren’t built to last. It’s about making peace with the fact that you won’t be there for the end of the story.

Finally, Cook turned his speech to the topic of Steve Jobs, who famously stood on the same stage 14 years ago to give the commencement address.

Cook related the story of his conviction that Jobs would recover from his cancer, even as he handed the reins of Apple over to Cook. Drawing from what he learned in those dark days, Cook emphasized that "your mentors may leave you prepared, but they can't leave you ready."

Calling it the "loneliest I've ever felt in my life," Cook reflected on feeling the heavy expectations of those around him, noting that he eventually he realized he needed "be the best version" of himself and not let those around him and their expectations dictate his life.

Graduates, the fact is, when your time comes, and it will, you’ll never be ready.

But you’re not supposed to be. Find the hope in the unexpected. Find the courage in the challenge. Find your vision on the solitary road.

There are too many people who want credit without responsibility.

Too many who show up for the ribbon cutting without building anything worth a damn.

Be different. Leave something worthy.

And always remember that you can’t take it with you. You’re going to have to pass it on.

We still name drop a lot of people who died. So? Are you gonna stop name dropping your loved one or someone who heavily influenced the world?
Score: 23 Votes (Like | Disagree)

Yeah, no. Name dropping is usually done by people pretending they know someone famous in order to advance their position.

Cook actually knew Jobs and worked very closely with him for years, and was hand-picked by Jobs to lead Apple after he left. Therefore, by definition, it’s impossible for Cook to “name-drop” Jobs.
Score: 20 Votes (Like | Disagree)

He’s kind of integral to Apple and should be remembered.

Cook worked with Jobs very closely, offered him part of his liver, and was respected tremendously by Jobs.
Score: 18 Votes (Like | Disagree)

anthlis
I thought that was a poignant speech.

"There are too many people who want credit without responsibility.
Too many who show up for the ribbon cutting without building anything worth a damn."

build, don't tear down. Yes, I believe the students were excited to hear from Tim Cook, as they probably would be from any successful speaker on their day venturing to begin their own success.

True. It’s hilarious to see how triggered some of the MR Apple-hate posters are by Mr. Cook’s incredible wealth, success and power.

They must really feel so, so small in comparison. They try to tear someone else down to build themselves up, but news flash: it doesn’t work that way. Instead of hanging around an Internet forum constantly complaining, why not spend that time on something constructive? Like working on your own success, instead of feeling like a loser compared to those you envy.
Score: 14 Votes (Like | Disagree)

Bawstun
That’s nice, but when is he going to talk about stepping down?
Score: 12 Votes (Like | Disagree)
Read All Comments