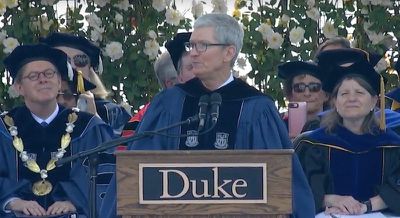 Cook challenged students to "think different" rather than accept the status quo, and to leave the world better than they found it, by following in the footsteps of leaders like Steve Jobs, Robert F. Kennedy, and Martin Luther King Jr.

He also reflected on Apple's commitment to the environment, privacy, immigration, and gun control, supporting the Me Too movement against sexual harassment and students involved in the Stoneman Douglas High School shooting.


An excerpt from his speech:

The pace at which progress is possible has accelerated dramatically. Aided by technology, every individual has the tools, potential, and reach to build a better world. That makes this the best time in history to be alive. Whatever you choose to do with your life, wherever your passion takes you, I urge you to take the power you have been given and use it for good. Aspire to leave this world better than you found it.

I didn't always see life as clearly as I do today. But I've learned that the greatest challenge of life is knowing when to break with conventional wisdom. Don't just accept the world you inherit today. Don't just accept the status quo. No big challenge has ever been solved, and no lasting improvement has ever been achieved, unless people dare to try something different. Dare to think different.

I was lucky to learn from someone who believed this deeply—someone who knew that changing the world starts with following a vision, not a path. He was my friend and mentor, Steve Jobs.

Steve's vision was that great ideas come from a restless refusal to accept things as they are, and those principles still guide us at Apple today. We reject the notion that global warming is inevitable—that's why we run Apple on 100 percent renewable energy. We reject the excuse that getting the most out of technology means trading away your right to privacy. So we choose a different path: collecting as little of your data as possible, and being thoughtful and respectful when it's in our care.

Cook's commencement address was similar to those he has delivered at a number of other universities in recent years, including at his undergraduate alma mater Auburn University in 2010, at George Washington University in 2015, and at the Massachusetts Institute of Technology last year.

Cook is a 1988 graduate of Duke's Fuqua School of Business and a member of the university's Board of Trustees.

snowboarder
it would be great if Tim started to think different...
Score: 88 Votes (Like | Disagree)

thadoggfather
Think differently, as long as you follow his political indoctrination in lockstep

Menopause
Is this guy *ever* at the Apple campus? Judging from his tweets it’d seems he is everywhere else but. The kind of lavatorial quality control of products and services Apple is suffering under him is shameful and disgusting. He only seems to be interested in nothing more than cash in his fat pockets and biased, liberal, lopsided agenda-driven politics.

Just leave Apple and run for a Dem post already FFS, at least give Apple a bloody chance to get back to great products again!
Score: 45 Votes (Like | Disagree)

Because someone has to when Apple doesn’t anymore...
Score: 40 Votes (Like | Disagree)

Tim Cook is a visionary. What a speech. Challenge the status-quo. Be the last to accept the world cannot be improved. Build a better way forward.

Tim Cook is not a visionary. Tim Cook is a conventional bean counting CEO who inherited a very popular and trendy brand from a true visionary. The brand is still popular enough they can paste the logo on most anything and it’ll sell like hot cakes, but poorly conceived and incomplete products like HomePod might not be saved by the brand name.

I actually wish Apple would encounter a financial set-back in the future so the board will realize it’s time to put a real visionary back in charge of this corporation. Apple isn’t doomed, but the wash-rinse-repeat formula won’t work forever.
Score: 36 Votes (Like | Disagree)
Read All Comments