Apple Confirms Dashboard is Going Away After 14 Years

Apple has removed Dashboard support from WebKit, not long after it was discovered that the feature has been completely dropped in macOS Catalina, according to a changelog spotted by Japanese blog Mac Otakara. 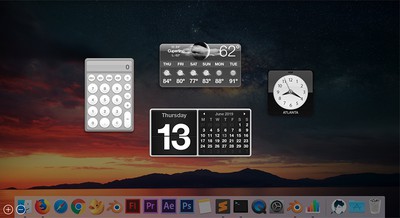 While this news is not entirely surprising, it eliminates any slim hope that Dashboard might have returned in a future beta of macOS Catalina. The feature has already been disabled by default since OS X Yosemite, but it can still be manually enabled within Mission Control in System Preferences as of macOS Mojave.

Dashboard, first introduced in OS X Tiger in 2005, was effectively a secondary desktop on the Mac that housed a variety of customizable widgets, ranging from sticky notes and the weather forecast to a clock and a calculator. These ‌widgets‌ have relied on Safari's open source WebKit engine for rendering.

Dashboard appears to remain functional in macOS Mojave for now, although it is clearly a legacy feature and some ‌widgets‌ do not work. After over 14 years, the feature is about to ride off into the sunset for good.

2010mini
Honestly I forgot it was even still there.
Score: 54 Votes (Like | Disagree)

Steve demoing Dashboard for the first time in 2005.

It's kind of odd to think that it was a precursor to Steve's iPhone vision. Originally, he intended for the iPhone to run web-apps rather than have an App Store, and Dashboard was a collection of glossy, skeuomorphic, web-apps with rounded rectangular icons and charming-but-cheesy animations.

Two years before we had this:

cashxx
Very sad! I use it multiple times a day to quickly check on stocks, weathers, packages at a click of a side button on my mouse to have it slide in as an overlay and back out in seconds. Will be something that may make me hold back updating along with the quick editing features of QuickTime 7.
Score: 23 Votes (Like | Disagree)
Read All Comments

Wednesday July 28, 2021 11:08 am PDT by Juli Clover
Since AirTags were just released earlier this year and are expected to have a year-long battery life, it may be some time yet before AirTag users need a replacement battery, but when the time comes for a refresh, Apple is warning customers not to buy batteries with a bitter coating. AirTags use coin-shaped CR2032 batteries, which happen to be a size that's easy to swallow. Some battery...
Read Full Article • 167 comments