Just hours ahead of Apple taking the stage at WWDC 2019, Ben Geskin has leaked a screenshot of what he claims is the new Reminders app coming to iOS 13, complete with the update's widely rumored Dark Mode. 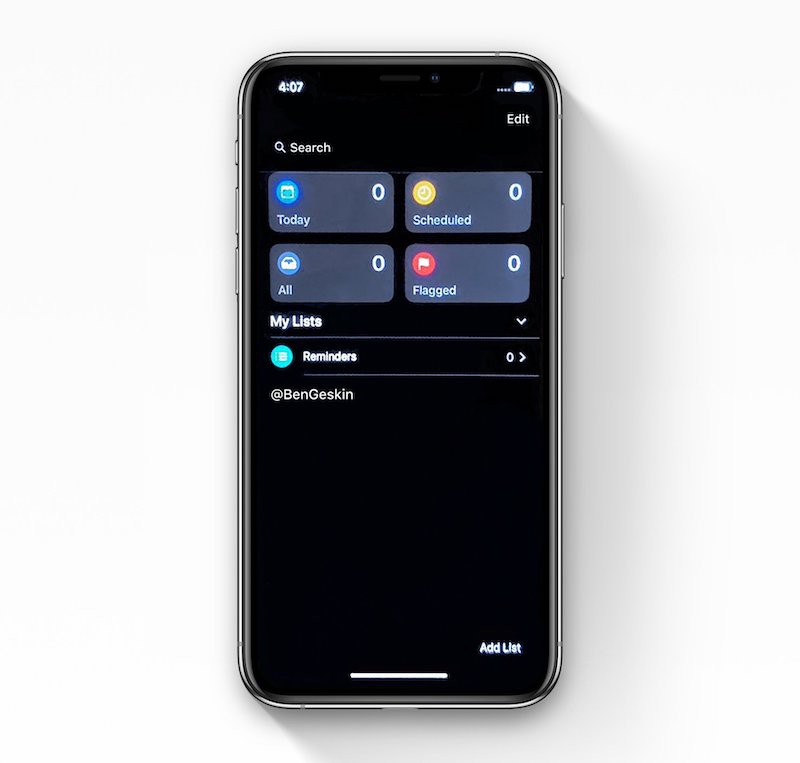 The image actually appears to be a photo of the screenshot, superimposed over an iPhone XS frame, as evidenced by its blurriness.

The redesigned Reminders app has a much cleaner design than the current version, with categories for Today, Scheduled, All, and Flagged, as we saw in a leaked screenshot of the new Reminders app on iPad last week. Dark Mode appears to be a true-black interface, which would of course benefit battery life.

Reminders is one of many Apple apps expected to be updated in ‌iOS 13‌, alongside Messages, Mail, Maps, Books, and Health, according to Bloomberg's Mark Gurman. He has also reported that Apple will merge its Find My iPhone and ‌Find My‌ Friends apps into one app for tracking the location of devices and friends.

MacRumors will have live coverage of the WWDC keynote on our website and on Twitter starting at 10 a.m. Pacific Time. Apple will also be providing a live stream of the keynote on its website and at select Apple retail stores around the world. Follow along throughout the day for up-to-the-minute updates.

Sadly not terribly excited for iOS 13 as it's shaping up to be another disappointment.

Agreed. This unreleased OS is probably the most disappointing one I haven't used. :(
Score: 40 Votes (Like | Disagree)

johnnyenv
I can see this being a huge disappointment of a release.
Dark mode doesn't exactly fix the aging look and lackluster features of what could be done with the technology there.
13 years later and there is still no way to mass move icons other than one by one.
Screens and screens of jumbled icons that become just unused because they're lost and the folders just don't work well enough. Why on earth you're restricted to 9 icons in a folder when the phone is capable of displaying 24 icons.

I can see this being a huge disappointment of a release.
Dark mode doesn't exactly fix the aging look and lackluster features of what could be done with the technology there.
13 years later and there is still no way to mass move icons other than one by one.
Screens and screens of jumbled icons that become just unused because they're lost and the folders just don't work well enough. Why on earth you're restricted to 9 icons in a folder when the phone is capable of displaying 24 icons.

For mass moving icon, try clicking another icon when holding one.
Score: 13 Votes (Like | Disagree)

Sadly not terribly excited for iOS 13 as it's shaping up to be another disappointment.
Score: 11 Votes (Like | Disagree)

You can mass move icons...

He’s only been trying for 13 years; give him a chance.
Score: 10 Votes (Like | Disagree)
Read All Comments