‌Dark Mode‌ can be enabled in the Settings app or in Control Center. On the home screen, the only noticeable change is the dock, which has a darker appearance. In apps, it appears that backgrounds will be true black under ‌Dark Mode‌, which should lead to battery savings on iPhones with OLED displays.

A redesigned Reminders app on iPad is shown with a large sidebar with separate categories for Today, Scheduled, All, and Flagged. This new layout was first reported by Bloomberg's Mark Gurman.

The report claims the new "‌Find My‌" app has a large map, a list of the user's family and friends, and a separate tab for the user's own devices. The new icon and additional screenshots can be seen over at 9to5Mac.

WWDC 2019 kicks off with Apple's opening keynote on Monday at 10 a.m. Pacific Time, where the company is widely expected to take the wraps off iOS 13, macOS 10.15, watchOS 6, and tvOS 13. MacRumors will have full coverage of the event, including a live blog, so be sure to follow along next week. 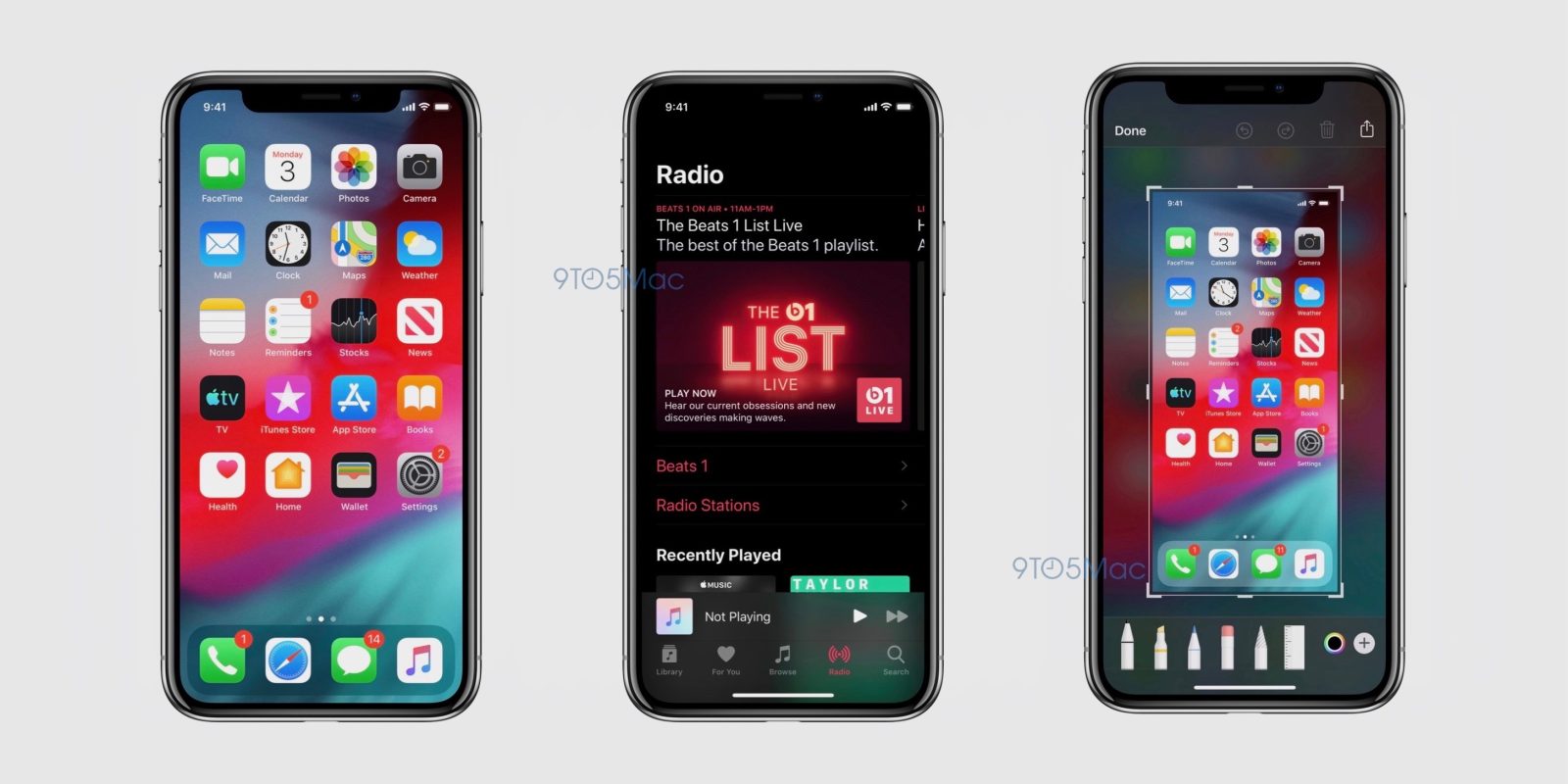 If iOS13 doesn't have a complete refresh and redesign after the lacklustre iOS12 I'll be so disappointed. The UI is plain and simply horrible. I cant believe we've had those ***** icons for 6 years from a company that is supposes to be world class when it comes to design.
Score: 33 Votes (Like | Disagree)

DNichter
People complain about everything on this site. This is a quick look at 1 feature from iOS 13 and people's heads are exploding. Calm down and wait until next week to see all the features.
Score: 27 Votes (Like | Disagree)

Your comment epitomises MacRumors. iOS 12 had a massive performance boost for older devices which is far more technically versed than changing a few icons. There's always stuff that can be improved, yes, but it's never as bad as people say.

Update the UI - people complain about form over function. "What about the days of Snow Leopard where performance was the only update? Steve would be rolling in his grave."

Update the performance - people complain that it looks the same. "What about the days of Leopard where they actually made differences to how the OS looked? Steve would be rolling in his grave."

It's it about bloody time?

There is no functional problems with the home screen, so why change it? If they change it, you will get bored of the new one after 10 minutes, so either way it doesn't matter
Score: 16 Votes (Like | Disagree)

jsmith189
i'm just happy it's actual black and not the blue/grey people keep going with.
Score: 12 Votes (Like | Disagree)
Read All Comments

Saturday April 17, 2021 4:43 am PDT by Sami Fathi
Reliable leaker known as l0vetodream has hinted that Apple may debut its rumored redesigned and colorful iMac at its "Spring Loaded" event on Tuesday, April 20. In a tweet, the leaker posted an image of Apple's logo used for marketing the upcoming event and an image of the retro rainbow Apple logo alongside the colorful lineup of G3 iMacs. Apple leaker Jon Prosser previously reported that...
Read Full Article • 282 comments

Monday April 19, 2021 6:37 am PDT by Hartley Charlton
Apple is planning to launch a new entry-level iPad, iPad mini, and iPad Pro at its "Spring Loaded" event tomorrow, along with "a few surprises," according to Wedbush analysts. In a new note to investors, seen by MacRumors, Wedbush analysts Daniel Ives and Strecker Backe explained that the iPad will be the main focus of Apple's "Spring Loaded" event, with new entry-level iPad, iPad mini, and ...
Read Full Article • 181 comments

Monday April 19, 2021 11:30 am PDT by Juli Clover
The upcoming 12.9-inch iPad Pro will be thicker than the previous-generation version, likely due to the inclusion of the mini-LED display. We've heard several rumors about the change in thickness, and now leaked design images have confirmed it. A source that designs accessories for Apple devices sent MacRumors a series of photos that feature exact dimensions for the new iPad Pro models, and...
Read Full Article • 219 comments

Monday April 19, 2021 7:51 am PDT by Sami Fathi
Following the removal of the app in January, Apple will now allow the social media app Parler to return to the App Store following changes to how the social media network moderates content, CNN reports. On April 14, in a letter to Sen. Mike Lee and Rep. Ken Buck obtained by CNN, Apple said that the app has improved the way it moderates content, and says those changes are "sufficient" for it...
Read Full Article • 256 comments