In a recent op-ed for The New York Times, Google CEO Sundar Pichai said that "privacy cannot be a luxury good offered only to people who can afford to buy premium products and services," a comment that some viewed as a dig at Apple. 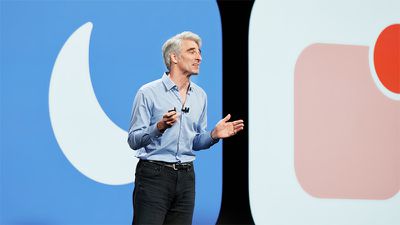 Craig Federighi at WWDC 2018
Apple's software engineering chief Craig Federighi has unsurprisingly disagreed with that position. In an interview with The Independent, he said that Apple aspires to offer great product experiences that "everyone should have," while cautioning that the values and business models of other companies "don't change overnight."

"I don't buy into the luxury good dig," says Federighi, giving the impression he was genuinely surprised by the public attack.

"On the one hand gratifying that other companies in space over the last few months, seemed to be making a lot of positive noises about caring about privacy. I think it's a deeper issue than then, what a couple of months and a couple of press releases would make. I think you've got to look fundamentally at company cultures and values and business model. And those don't change overnight.

"But we certainly seek to both set a great example for the world to show what's possible to raise people's expectations about what they should expect the products, whether they get them from us or from other people. And of course, we love, ultimately, to sell Apple products to everyone we possibly could certainly not just a luxury, we think a great product experience is something everyone should have. So we aspire to develop those."

Federighi emphasizes Apple's commitment to privacy throughout the interview, noting that the company aims to collect as little data as possible. When it does collect data, Apple uses technologies like Differential Privacy to ensure that the data cannot be associated with any individual user.

Federighi also refutes criticism about Apple's products and services being worse off because of its pro-privacy position:

"I think we're pretty proud that we are able to deliver the best experiences, we think in the industry without creating this false trade off that to get a good experience, you need to give up your privacy," says Federighi. "And so we challenge ourselves to do that sometimes that's extra work. But that's worth it."

As an example of Apple's privacy efforts, the article provides a look inside Apple's "top secret testing facilities" where its Secure Enclave chips for devices like the iPhone, iPad, Mac, and Apple Watch are said to be "stress tested" based on "extreme scenarios" like ice-cold -40ºF or blazing-hot 230ºF temperatures.

One of Apple's chip-testing labs (Brooks Kraft/Apple via The Independent)
Within these testing facilities near Apple Park is said to be "a huge room" with "highly advanced machines" that heat, cool, push, shock, and abuse chips before they make their way inside Apple devices, but no further details were shared.

The lengthy interview goes on to discuss Apple's dispute with the FBI over its refusal to unlock an ‌iPhone‌ used by the shooter in the 2015 San Bernardino attack, as well as Apple's decision to store the iCloud data of Chinese accounts on servers overseen by GCBD, a company with close ties to the Chinese government.

kis
And that’s why I switched from Google services and Android to Apple.

Honestly, Google’s every fiber is evil IMO. They monetize on gutting their customers’ personal data, not giving a crap what that ends up doing to the individuals. And what’s especially low: they deliberately prey on those who can’t afford anything else.

What google does is, in my opinion, against basic human decency. But if you look at the constant flow of scandals about discrimination and sexual abuse within the company itself, it’s not really surprising.
Score: 33 Votes (Like | Disagree)

deeridiot
I haven't yet read Pichai's column, but the comment quoted sounds very dense. Of course we (the users, not Google or Facebook) all agree that privacy should not be a luxury good. Pichai is in the unique position to make that happen! If they improved privacy on Android and Google services, suddenly everyone would have access to it! But that will never happen since that's where they get the $$$.
Score: 13 Votes (Like | Disagree)

Uh, my iCloud data is stored in China?

I believe from reading the article it's only for Chinese iCloud accounts.
Score: 11 Votes (Like | Disagree)

Attirex
Those who can't afford, and don't have, a smartphone probably have the best privacy of anyone.
Score: 11 Votes (Like | Disagree)

And that’s why I switched from Google services and Android to Apple.

Honestly, Google’s every fiber is evil IMO. They monetize on gutting their customers’ personal data, not giving a crap what that ends up doing to the individuals. And what’s especially low: they deliberately prey on those who can’t afford anything else.

What google does is, in my opinion, against basic human decency. But if you look at the constant flow of scandals about discrimination and sexual abuse within the company itself, it’s not really surprising.

What exactly is it you think Google is doing? I see rhetoric and hyperbole in your comment, but nothing of substance. Evil, gutting, preying, against human decency... like how? It's totally fine not to want Google in your life, but you should probably save the overly dramatic prose for something that's worth it. Still I'd really like to know what you think Google is doing.
Score: 9 Votes (Like | Disagree)

apolloa
We will see, Apple is being sued for selling users information, that’s not been reported on this site though.

So much for privacy Apple, sold to the highest bidder it seems... bunch of hypocritical liars.
Score: 8 Votes (Like | Disagree)
Read All Comments

Saturday December 3, 2022 10:23 am PST by Joe Rossignol
iPhone 12 Pro and Pro Max, iPhone 13 Pro and Pro Max, and iPhone 14 Pro and Pro Max models feature a LiDAR Scanner next to the rear camera that can be used to measure a person's height instantly in Apple's preinstalled Measure app. To measure a person's height, simply open the Measure app, point your iPhone at the person you want to measure, and make sure they are visible on the screen from...
Read Full Article • 94 comments