Just days ahead of WWDC 2019, freelance graphic designer Álvaro Pabesio has shared a new iOS 13 concept that envisions many features and changes rumored for the software update, including a long-awaited Dark Mode, a less obtrusive volume indicator, and the iPad serving as an extended display for the Mac.

Dark Mode can be toggled in Control Center and is applied systemwide for a darker appearance that is easier on the eyes. Several rumors suggest ‌Dark Mode‌ is coming to iOS 13, following in the footsteps of macOS Mojave. 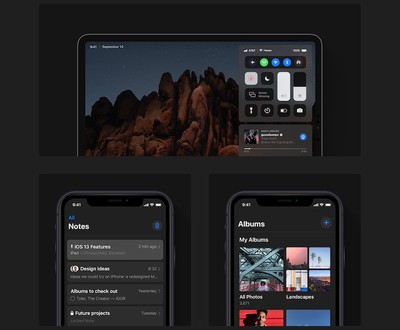 The redesigned volume indicator concept is far less obtrusive than the current one, which has become the subject of memes. Apple's software engineering chief Craig Federighi recently suggested that a new volume indicator is finally on the horizon in an email to a customer and it looks like it is a lock for ‌iOS 13‌.

The concept imagines several productivity improvements on the iPad, including a multi-tabbed Files app with a new sidebar and a rumored desktop extension feature that would enable the ‌iPad‌ to be used as a drawing tool for Mac apps.

Other redesigned apps include Reminders, Music, Mail, and Messages, many of which are in fact expected to receive makeovers in iOS 13.

Pabesio also envisions several other features that are not guaranteed for ‌iOS 13‌, at least not exactly how he imagines them, including a redesigned Notification Center and Control Center, multi-user support on the iPad Pro with Face ID integration, and expandable folders in the ‌iPad‌'s dock.

“It’s that thing attached to your iPad by that dongle.”
Score: 15 Votes (Like | Disagree)

Peepo
Guess if Apple doesn’t make iPad Pro more capable as a real computer replacement, we will at least be able to use it hooked up as display to a real computer LOL.
Score: 10 Votes (Like | Disagree)

jonblatho
There’ll be immense whining, I’m sure, about how this implementation of Dark Mode is not fully black especially for the OLED displays. Apple’s likely won’t be, either, because it’s poor UX design with increased eye strain and leads to OLED smearing, which is just ugly.
Score: 4 Votes (Like | Disagree)

Looks really nice, but not getting my hopes up of getting all that. But if anybody has found those wallpapers he used, please let me know!

Saturday May 30, 2020 4:00 pm PDT by Eric Slivka
Apple today doubled the price for upgrading the RAM on the entry-level 13-inch MacBook Pro, with customers in the United States now being charged $200 to move from 8GB to 16GB compared to the previous $100 upgrade price. Similar increases are seen in other countries, such as moving from €125 to €250 in Germany and from £100 to £200 in the United Kingdom. Current pricing on RAM upgrade for ...
Read Full Article • 272 comments