Ahead of Apple introducing iOS 13 at WWDC in June, 9to5Mac's Guilherme Rambo has shared new details about what to expect. The report cites sources familiar with the matter and help from developer Steve Troughton-Smith. 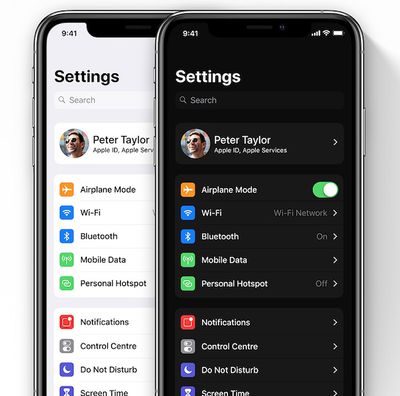 iOS 13 Dark Mode concept by Léo Vallet
First, the report claims that a long-awaited systemwide ‌Dark Mode‌ is coming to the iPhone and iPad with iOS 13:

There will be a system-wide Dark Mode that can be enabled in Settings, including a high contrast version, similar to what's already available on macOS. Speaking of macOS, iPad apps that run on the Mac using Marzipan will finally take advantage of the Dark Mode support on both systems.

Improved multitasking is expected on the ‌iPad‌ with iOS 13, including support for multiple windows and stackable cards in apps:

Each window will also be able to contain sheets that are initially attached to a portion of the screen, but can be detached with a drag gesture, becoming a card that can be moved around freely, similar to what an open-source project called "PanelKit" could do.

These cards can also be stacked on top of each other, and use a depth effect to indicate which cards are on top and which are on the bottom. Cards can be flung away to dismiss them.

To the joy of everyone, iOS 13 is said to feature a new volume HUD that is hopefully far less obtrusive than the current one. Apple's software engineering chief Craig Federighi hinted at this in an email to a customer earlier this year.

iPads are also expected to receive a new standard undo gesture for text input on iOS 13 beyond the existing shake-to-undo. The report claims the new gesture is initiated with a three-finger tap on the keyboard area, and then users can slide left or right to undo and redo actions interactively.

Additional gestures are expected to be introduced in iOS 13 that allow for the selection of multiple items in table views and collection views. Users will supposedly be able to "drag with multiple fingers on a list or collection of items to draw a selection, similar to clicking and dragging in Finder on the Mac."

The report adds that Safari for ‌iPad‌ on iOS 13 will automatically ask for a desktop version of websites when necessary, while the Mail app will organize messages into searchable categories such as marketing, purchases, travel, "not important," and more. The new Mail app is also said to have a "read later" queue.

Other features expected in iOS 13 include a redesigned Reminders app that extends to the Mac, improved "Hey Siri" rejection for common ambient noises such as laughter and crying babies, improved multilingual support for keyboards and dictation, and expanded in-app printing controls, according to 9to5Mac.

Why are they adding dark mode? No one wants it And no one will use it if it comes out.. what a waste of billions of dollars to develop it

DHagan4755
How about a legit files app with none of the current limitations?! That should be top of the list.
Score: 36 Votes (Like | Disagree)

lunarworks
One thing I'd love in iOS 13 is for incoming phone calls to go to a drop-down notification if you're using the device. There's absolutely no reason for it to completely take over your screen anymore.
Score: 35 Votes (Like | Disagree)

Pepe4life
How about letting me plug in an external hard drive into the usbc port on my iPad Pro?
Score: 21 Votes (Like | Disagree)

peteullo
I wouldn’t be mad if dark mode was the only new feature in iOS13.
Score: 18 Votes (Like | Disagree)


That’s it. It’s a success already. There will be no more complaints on here ever again. (Yeah, right).

Apple could implement all popular requests on this site and give all of their hardware away for free and there would still be a bunch of complaints on here.
Score: 15 Votes (Like | Disagree)
Read All Comments

Wednesday July 6, 2022 4:59 am PDT by Joe Rossignol
Apple today announced that the new MacBook Air equipped with the M2 chip will be available to order starting Friday, July 8 at 5 a.m. Pacific Time. Apple said deliveries to customers and in-store availability will begin Friday, July 15. MacRumors exclusively reported that Apple planned to launch the new MacBook Air on July 15, and the date has now been confirmed by Apple. Customers will be...
Read Full Article • 147 comments

Tuesday July 5, 2022 12:10 pm PDT by Juli Clover
Apple today released new firmware for the Siri Remote designed for the Apple TV, updating the software from version 9M6772 to 10M1103. The software is for the redesigned Siri Remote that was released in May 2021, aka the gray remote with the updated interface. In the Apple TV settings, the new firmware will display as 0x0070, up from 0x0061. There is no word on what's new with the Apple TV...
Read Full Article • 154 comments