Monday May 20, 2019 9:02 am PDT by Eric Slivka
Over the past few months, supplies of the LG UltraFine 4K and 5K displays have dried up at Apple's retail and online stores, leading to speculation on the future of Apple-approved displays beyond a rumored ultra high-end 6K display perhaps coming alongside a revamped Mac Pro later this year. 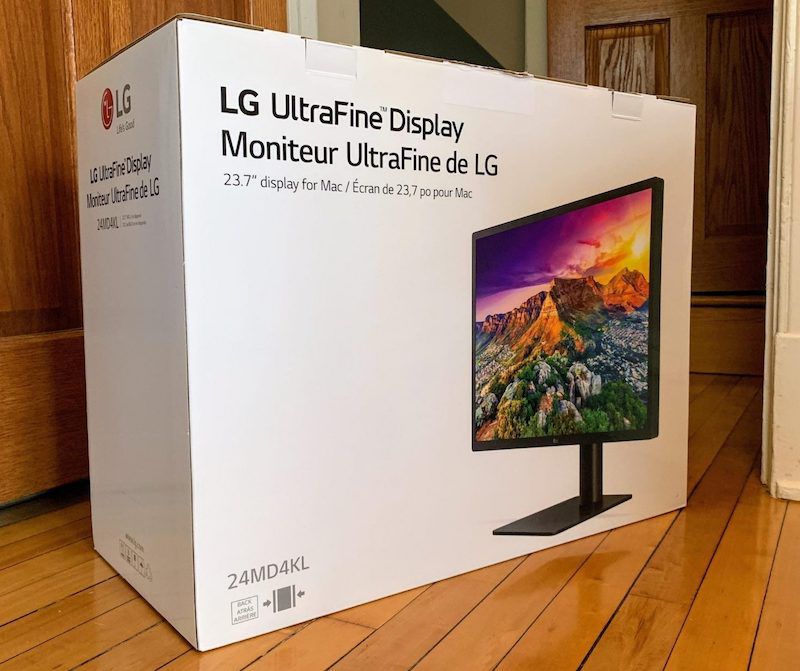 As shared by TidBITS, however, Apple retail stores are now quietly carrying a new $700 23.7-inch UltraFine display from LG. TidBITS' Julio Ojeda-Zapata was able to locate the new display in two different ‌Apple retail‌ stores, but it is not currently listed in the company's online store.

To my surprise, an employee told me I should consider forgoing the 21.5-inch model. Why? “Because we have a larger LG display for the same price.” Laid out for me on the floor were boxes for the two monitors—including the 23.7-inch version that had seemingly come from nowhere.

At 23.7 inches, the new UltraFine display sits between the original 21.5-inch 4K and 27-inch 5K display, but there is some confusion over the resolution of the display. Ojeda-Zapata claims that it only offers a resolution of 3360x1890, which would not reasonably allow it to serve as a Retina-quality display, but a user manual (PDF) for the display indicates that its native resolution is in fact 3840x2160. That's still less than that 4096x2304 resolution of the smaller 21.5-inch UltraFine 4K, but it would at least qualify as an Ultra HD resolution that is typically marketed as being 4K.

DogHouseDub
Only 24 inches? Is it a watch?
Rating: 8 Votes

16 x 9 and wider is just a ridiculous format for so many uses.

Some of us want to get work done, not watch movies.

(Yes, you can put things side by side...I’m aware. I just want some more optionality in the display market)
Rating: 8 Votes

ThisBougieLife
Well so much for Apple making their own smaller display :(

For those of us who will find the 6K display too expensive and too large (is the Mac Mini’s iGPU even going to be able to drive it?) this might be the only alternative.
Rating: 7 Votes

I've noticed a massive different going to a work-supplied laptop that is 16:9 coming from a MBP with 16:10. Vertical height is more important to me than horizontal. Luckily I can still do most of my work on my iMac, which still being 16:9, is at least large enough to have a reasonable height because it is 27". But I would love to see a 1:1 ratio display available.


Well, 1:1 might be a bit extreme, ha, but 3:2 would be a great companion monitor to a 16:10. I just don't understand why Windows laptops choose 16:9 screens when it just provides an ugly and wasteful huge lower bezel. I've had a few ThinkPads and that was the most annoying thing about them (other than they ran Windows).
Rating: 6 Votes

how do you quietly carry a new monitor?

purchase it with cash, hide it in garage and carry it to the room at mid night. no one will notice that.;)
Rating: 4 Votes

Rumors suggest an eGPU setup within the 6K display, theoretically putting the horsepower onboard the display

Oh good. So if the gpu in the monitor fails, the whole thing is trash.
Rating: 4 Votes


Don't like it either, display is mostly not the problem, the stand is.

Nobody can make a display as beautiful as the Apple all aluminium displays, the ones without black bezels, it was iconic.
Rating: 4 Votes

AZREOSpecialist
Apple is leaving its desktop users behind. Wait for Mac Pro w/ display, it will be a $15,000 debacle that nobody will buy and headlines will harken back to the Lisa. Apple will find a way to screw it up.
Rating: 4 Votes