Apple has removed the 4K LG UltraFine Displays from its online Apple Store in the United States, continuing a trend of pulling the display from its online stores around the world. Before disappearing from the store, the display had been listed as "Sold Out" for quite some time.

It's not clear why Apple has stopped selling the 4K LG UltraFine Display, but it is several years old at this point, having first debuted in 2016. 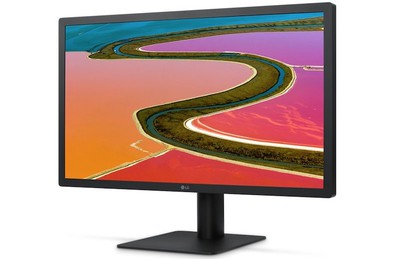 The 4K and 5K UltraFine Displays were designed by LG in partnership with Apple and were created to be used with the 2016 13 and 15-inch MacBook Pro models, which supported Thunderbolt 3 for the first time.

The 21.5-inch 4K LG UltraFine Display offered a resolution of 4096 x 2304 with support for P3 wide color gamut and 60W of power delivery for charging a MacBook. It was selling from Apple for $700 before being pulled from the online store.

LG recently debuted a new 4K UltraFine Display, but this new model, priced at $1300, was not designed in partnership with Apple and it doesn't seem like Apple is planning to replace the existing model with this one in its retail stores.

Subscribe to the MacRumors YouTube channel for more videos.
Apple is still selling the LG UltraFine 5K Display for $1300, and Best Buy is continuing to offer the original UltraFine 4K Display from 2016 for its original $700 price, suggesting it has not been discontinued by LG.

Apple is working on an Apple-branded display that will be sold alongside the high-end high-throughput modular Mac Pro that's in the works, but with a rumored 6K resolution and a 31.6-inch screen size, it's sounding like it's going to be ultra high end (and expensive) and not a replacement for traditional 4K and 5K displays.

Roscorito
Hope this means the 6k will be accompanied by a smaller 4K miniLED option that can be bought for one kidney, as opposed to two.
Score: 43 Votes (Like | Disagree)

It's not clear why Apple has stopped selling the 4K LG UltraFine Display, but it is several years old at this point

Apple afraid to sell something that several years old? Now you are just making me laugh at work for no good reason.
Score: 42 Votes (Like | Disagree)

gugy
I can only hope the Apple new displays and Mac Pro are finally around the corner. Maybe at WWDC. About damn time.
Score: 29 Votes (Like | Disagree)

Exactly, because computers only use-case is editing 4k video, computers are not used for anything else
Score: 27 Votes (Like | Disagree)

My 2014 iMac edits 4K video without breaking a sweat. In any case, what does that have to do with monitor resolution?
Score: 17 Votes (Like | Disagree)
Read All Comments