A curious stage with a rainbow-colored arch was spotted yesterday in drone footage we shared of the Apple Park campus, leading to speculation about what it might be for.

As it turns out, the arch, which is in the rainbow colors of the original Mac logo, is for an upcoming May 17 employee event that will celebrate the formal opening of ‌Apple Park‌ and serve as a tribute to Steve Jobs, who conceptualized the spaceship-like design of the main building on the campus prior to his death. 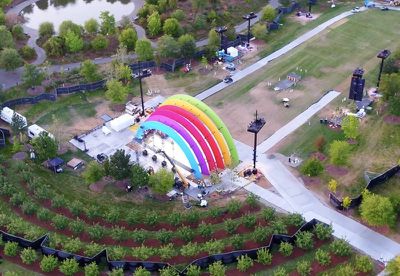 Details on the event and an interview with Apple design chief Jony Ive were shared by Cult of Mac after the site obtained a copy of internal information about the project that was originally shared with Apple employees.

Jony Ive's design team created the multicolored arch in partnership with a custom concert staging company, and conceptualizing the design took months of work. It's made from 30 unique machined components that make it easy to build up and take down for special events, but there are 25,000 parts in all including the structure itself and the metal skeleton underneath.


According to Ive, the overall goal was to "create a stage that would become immediately recognizable as the Apple Stage." The rainbow color was chosen because it's "been part of [Apple's] identity for many years."

Ive also said that the rainbow's presence is "keenly felt in many places" and that at the end of the day, it's "hard to find somebody that doesn't love a rainbow."

The arch was created to be a three-dimensional object able to be "appreciated in the round" rather than just the front.

If you look at a plan view of Apple Park, the rainbow occupies an almost insignificant area. But it has a relevance and impact that is disproportionate to the area it occupies.

My space in Apple Park is on the external part of the perimeter. But I can see the rainbow reflected in the ceiling all the way through to where I sit. That truly wasn't planned but one of those lucky accidents.

We had planned the way in which the colors interplay between the discrete bands of the rainbow throughout the day making it more vital and fluid. There are some wonderful but subtle combinations and reflections.

It sounds like the rainbow arch won't be a permanent fixture at the campus, but will be able to be removed and put back up for various events hosted at ‌Apple Park‌.

There are no details on Apple's May 17 event for employees, but MacRumors was told that there will be a big name artist performing at the event. Apple's ‌Apple Park‌ Visitor's Center will be closed on May 17 due to the event.

johnyslats
Explains the lack of a radical iPhone redesign this year. The design team sure have had their hands full!
Score: 41 Votes (Like | Disagree)

tgwaste
At this point, everyone at Apple is just completely full of BS.
Score: 37 Votes (Like | Disagree)

This is why you won't be seeing a new Mac Pro this year.
Score: 25 Votes (Like | Disagree)

now i see it
its as if everything the guy does has to be some sort of Moby Dick masterpiece. It's just a multicolored arched stage. Geezus
Score: 24 Votes (Like | Disagree)
Read All Comments