As part of the iOS 12.3 release yesterday, Apple Music updated with a brand-new "For You" section. This refreshed tab now updates multiple times per day with new music suggestions based on genres you love, artists you might enjoy, and moods that match certain themes. Overall, the tab also now falls in line with the layout changes previously seen in ‌Apple Music‌'s Browse tab that hit earlier this year. 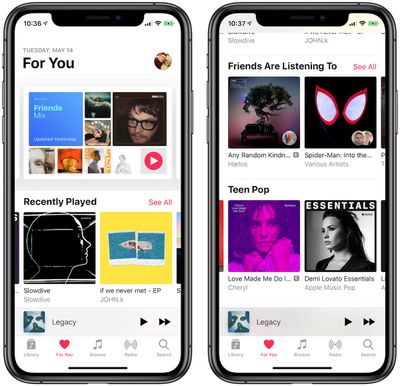 The top of For You still highlights your various personal "Mixes" that ‌Apple Music‌ curates throughout the week, including Favorites, Friends, Chill, and New Music. Below this is where the changes appear, beginning with "Recently Played" playlists and albums appearing above "Friends Are Listening To," whereas before it was the reverse order.

Below that, For You is divided into various themed sections based on your listening habits, which will be different for every user. These include areas like "Teen Pop," "Rise and Smile," "It's Only Tuesday?," recently updated playlists, genres like country and electronic, and more.

‌Apple Music‌ can now even curate song and artist recommendations based on your own personal playlists. Sections like this are called "Based on [Playlist Name]" and they present you with albums that you might be interested in, based on the songs that you have in the designated playlist.

Finally, at the very bottom of For You there is a category for recommended friends and "New Releases." Updates to ‌Apple Music‌'s user profiles or any other tabs in the app have not appeared, but you can see the new For You tab in iTunes on Mac as well.

The ‌Apple Music‌ updates in iOS 12.3 appeared alongside a lengthy list of features, including AirPlay 2 for smart TVs, a redesigned TV app for the Apple TV, and various other bug fixes and improvements.

It is absolute trash, isn't it?

No, AM, I do not want to listen to top 40 garbage. Considering I have never once ever listened to any of the artists listed on browse you would think it would be smart enough to filter out that music, but nope.

The browse tab is not meant to give you personalised recommendations. That's what For You is for.
Score: 13 Votes (Like | Disagree)

I switched from AM to Spotify and love it.

- I can add songs I purchased elsewhere to my Library, sync/stream them across my devices as they were part of Apple Music
- I can edit the metadata of songs (no more weird genre categorisations, misnamed songs, mismatched album covers)
- I can create smart playlists with intricate rules
- I have fined-grained custom controls for each song (I can even set different equalisation set ups depending on my songs)

Sure, Spotify is better if you live on third-party playlists. If you actually care about your library, Apple Music is the only streaming service that actually allows you to have full control over every aspect.
Score: 8 Votes (Like | Disagree)

Just so everyone knows, the Browse tab still sucks.

It is absolute trash, isn't it?

No, AM, I do not want to listen to top 40 garbage. Considering I have never once ever listened to any of the artists listed on browse you would think it would be smart enough to filter out that music, but nope.
Score: 4 Votes (Like | Disagree)

squizzler
Spotify is a far cry behind.
Score: 3 Votes (Like | Disagree)

I get Apple Music for free with my Verizon Wireless subscription. I tried using it. I tried liking it, I really did, but Apple Music just seems clueless. For example, I created a station from the band, Shinedown. They are a rock band...pretty much pure rock. So why did Apple Music play country and rap on my Shinedown station? It's either way too smart or way too stupid. I'm guessing the later.

I gladly pay for Amazon Music, even though I get Apple Music for free.

Well try first setting up your likes and dislikes (not sure if you did that) when first setting it up, and liberally use "thumbs up" or "down" so it can build a refined portrait of your taste and what you like and dislike. I have done this and it is much more accurate now. I presume most streaming services are similar.
Score: 2 Votes (Like | Disagree)

Spotify is a far cry behind.

I switched from AM to Spotify and love it.
Score: 2 Votes (Like | Disagree)
Read All Comments