Apple recently lowered direct trade-in values for iPhones, providing customers with a maximum of $349 when trading in an iPhone without purchasing a new one at the same time.

Apple used to offer a maximum of $500 when doing a direct ‌iPhone‌ trade-in through its trade-in website, and just a few weeks ago, we tested trading in an ‌iPhone‌ X and were offered $500 by Apple. Today, Apple's maximum price for the same ‌iPhone‌ X is $349. 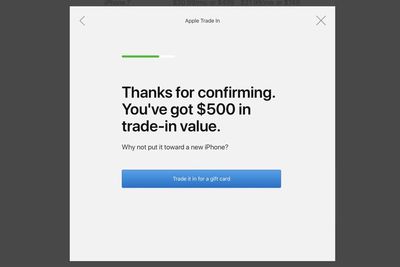 ‌iPhone‌ X trade-in value from April 30 (trade-in site)
Not all iPhones were worth $500, but for newer models in good condition, Apple was indeed providing credit up to $500 in the form of an Apple gift card that could be put towards a new device purchase.

‌iPhone‌ X trade-in value today (trade-in site)
The $349 maximum seems to apply only to direct trade-ins that don't involve a purchase. If you use the trade-in process while purchasing a new ‌iPhone‌, which puts the cost of that trade-in towards the new device, you can get higher prices.

That same ‌iPhone‌ X that's worth $349 when doing a direct trade-in with Apple is worth $450 if you trade it in while buying a new ‌iPhone‌ XR. At $450, Apple is still offering less than the $500 maximum ‌iPhone‌ trade-in value that was available before, but it's still better than the $349 that's available through the trade-in site.

On its trade-in site, Apple heavily promoted a $449 trade-in price for the ‌iPhone‌ XR when trading in an ‌iPhone‌ 8 or ‌iPhone‌ 7 Plus, but now the advertised pricing is $479 instead of $449. Listed ‌iPhone‌ XR and XS pricing with trade-in has gone up across the board as Apple has dropped trade-in values for all iPhones.

Apple's ‌iPhone‌ X trade-in offer today when purchasing new ‌iPhone‌
Apple has a prominent section on all iPhone purchase pages that asks "Do you have an ‌iPhone‌ to trade in?" and if you select yes, you can go through the steps to get the upgraded pricing.

Trade-in pricing on other devices has also dropped. Apple now offers a maximum of $367 for tablet trade-ins, up to $965 when trading in a computer, and up to $173 when trading in an Apple Watch. That's down from $405 for tablets, $1100 for computers, and $191 for an Apple Watch. Trade-in values do not differ on non-iPhone products between the trade-in site and a trade-in with purchase.

The new trade-in pricing system is confusing and could potentially lead to some customers getting lower value for their iPhones if they're not aware of the disparity in pricing between doing a direct trade-in through Apple's trade-in page and doing a trade-in when purchasing a new ‌iPhone‌.

Apple's new direct trade-in pricing is comparative to trade-in pricing from other sites like Gazelle, but you're always going to get the best price selling direct on a site like eBay or Swappa.

Nik
In the past I was considered to be an enthusiast. Now I am sticking with a phone for 2 or more years. Even though I could afford the upgrade costs, I do not _want_ to afford it anymore. It feels like a rip off.
Score: 25 Votes (Like | Disagree)

In the past I was considered to be an enthusiast. Now I am sticking with a phone for 2 or more years. Even though I could afford the upgrade costs, I do not _want_ to afford it anymore. It feels like a rip off.

I’d say a large part of the consumer market reflects your attitude currently, and they have the money to upgrade, but they don’t see the need to when their current iPhone does everything they require and more.

I’m similar to your thoughts as well, I was one that upgraded every single year with the iPhone/pre-ordered at midnight, but I’ve reached a point where my iPhone meets *all* my expectations with Face ID, the camera is outstanding, the processor has more than enough speed for what I am using my phone for, etc. The market is definitely saturated.

mi7chy
Apple could still do a lot better.

In the past I was considered to be an enthusiast. Now I am sticking with a phone for 2 or more years. Even though I could afford the upgrade costs, I do not _want_ to afford it anymore. It feels like a rip off.

I always updated every two years. The last couple of generations, I have been holding for three years. Honestly, I might hold on for four years with the current prices. The only thing that might entice me to upgrade is if I get a BOGO deal from my carrier. I honestly cannot fathom paying more than $800 for an iPhone. Apple got to get back to earth. Their prices are just out of this world.
Score: 4 Votes (Like | Disagree)

JimmyBanks6
Why anybody would do this when they can get significantly more on the open market is beyond me.
Score: 4 Votes (Like | Disagree)

IRockThat828pScreen
This has been a long time coming. I guess the Xr and Xs are finally selling how they want them to.
Score: 3 Votes (Like | Disagree)
Read All Comments