Apple Paid an Estimated $5-$6 Billion to Settle Qualcomm Dispute, Plus $8-$9 Per iPhone in Royalty Fees

Apple likely paid somewhere around $5 to $6 billion to settle its ongoing legal battle with Qualcomm, according to estimates shared today by UBS analyst Timothy Arcuri (via CNBC).

The $5 to $6 billion payment would have been for royalty fees that Apple had stopped paying over the course of its two year legal fight with Qualcomm. 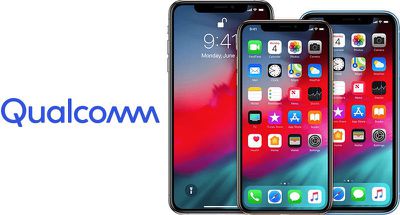 Qualcomm may also be receiving between $8 and $9 per iPhone from Apple in ongoing patent royalties, a figure calculated based on guidance numbers that Qualcomm provided following the settlement. Qualcomm said that it expects its earnings per share to increase by $2.

Apple previously paid $7.50 in royalties, so at $8 to $9 per ‌iPhone‌, Apple would be shelling out more cash than it did before.

Apple appears to have had no alternative but to settle with Qualcomm, as it had no other way to source 5G chips for its 2020 ‌iPhone‌ lineup. Apple initially planned to use Intel chips, but rumors suggested Intel wasn't meeting development goals, leading to tension between Apple and Intel.

Just hours after Apple and Qualcomm announced a settlement deal, Intel said that it was exiting the 5G smartphone modem business and would not be making 5G smartphone chips at all.

It's not entirely clear if Apple settled with Qualcomm because it knew of Intel's plan to abandon 5G chip development or if Intel made the decision after learning of Apple's settlement plans, but either way, it leaves Apple with no choice but to re-adopt Qualcomm chips for future iPhones.

Smartphone makers like Samsung will have 5G smartphones available starting this year, so Apple could not afford to delay the rollout of its 5G iPhones. Launching in 2020 already puts Apple somewhat behind, but 5G networks from U.S. carriers are still very much in development.

Following news of the settlement, Qualcomm's stock has gone up over 38 percent, marking a big win for the San Diego company. The agreement includes a six-year licensing deal along with a "multiyear chipset supply agreement."

It sounds like Apple will need to rely on Qualcomm for the foreseeable future, but Apple is working on its own modem chip technology, which may eventually allow it to drop Qualcomm as a modem chip supplier.

Apple previously paid $7.50 in royalties, so at $8 to $9 per iPhone, Apple would be shelling out more cash than it did before.

So, it backfired for Apple and they're now worse off for trying to throw another partner under the bus.
Score: 49 Votes (Like | Disagree)

BootsWalking
In other words, Charlie Demerjian was right:

"Qualcomm just pummeled Apple over patents and technology because, well, it appears the scales tipped in Qualcomm’s favor. SemiAccurate has been saying that Qualcomm would prevail and since we first started covering this suit and Apple’s tactics, and now they have. If you read our last piece on the suits it was pretty obvious that Apple was in the wrong, allegedly caught red handed, and dug the hole deeper with their petty and vindictive reactions. Qualcomm claims to have multiple emails where Apple gave sensitive trade secrets to a competitor, then refused to allow Qualcomm to exercise their contractual audit rights. While there may be some more evidence not presented publicly, it sure looks like Apple was in the wrong. So rather than fixing their alleged wrongs and making Qualcomm whole, they appear to have withheld legitimate royalty payments and launched a barrage of somewhat specious trade and patent related counter-suits along with lowball press sniping."

realtuner
So, a completely made up number with no basis in fact whatsoever.
Score: 32 Votes (Like | Disagree)

BvizioN
I think the years of this “partnership” would be pretty much numbered. Apple is only paying for some more time to develop its own modem.
Score: 18 Votes (Like | Disagree)

Only if you believe liars and their made-up numbers.

There's no way Apple would settle by paying MORE than previously. They initiated this case and they had the upper hand. This analyst just caters to the anti-Apple crowd (and the stock market manipulators/stock shorters) by trying to spin this as a Qualcomm win and Apple loss.

So if these numbers are made up like you say we can expect a write up from you a bit later with the real facts, right? These people crunch these numbers for a living, if the numbers aren't 100% accurate they aren't too far off. I know it hurts but just face it, Apple didn't have the upper hand and Apple knew they would've lost, that's why they settled out. The fact that Apple lied about having talks with Qualcomm says it all. Apple will never admit failure whether it's in faulty products or legal battles because their whole model is we're perfection and we know what's right. If Apple came out on top in this you'd dang well know it.
Score: 17 Votes (Like | Disagree)
Read All Comments

Saturday February 4, 2023 10:05 am PST by Eric Slivka
Online retailer TigerDirect has slashed pricing on the M1 iPad Air in several colors, offering the base 64GB configuration for just $313.99 in Purple and Pink. Note: MacRumors is an affiliate partner with TigerDirect. When you click a link and make a purchase, we may receive a small payment, which helps us keep the site running. That's a savings of 48% compared to Apple's normal $599.00...
Read Full Article • 538 comments