Britain's Prince Harry has revealed that he is working with Oprah Winfrey on a documentary series for Apple TV+ about mental health, due for launch sometime next year. 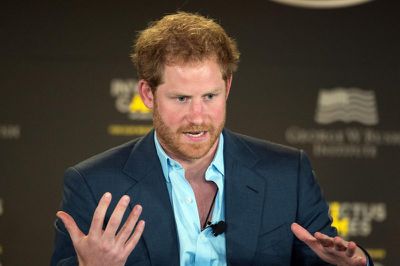 The Prince, also known as the Duke of Sussex, announced the partnership on his official Instagram account. The multi-part series is being co-created and executive produced by the Prince and Winfrey and has already been in development for several months.

The dynamic multi-part documentary series will focus on both mental illness and mental wellness, inspiring viewers to have an honest conversation about the challenges each of us faces, and how to equip ourselves with the tools to not simply survive, but to thrive. This commitment builds on The Duke of Sussex’s long-standing work on issues and initiatives regarding mental health, where he has candidly shared personal experience and advocated for those who silently suffer, empowering them to get the help and support they deserve.

Quote from HRH: "I truly believe that good mental health - mental fitness - is the key to powerful leadership, productive communities and a purpose-driven self. It is a huge responsibility to get this right as we bring you the facts, the science and the awareness of a subject that is so relevant during these times. Our hope is that this series will be positive, enlightening and inclusive - sharing global stories of unparalleled human spirit fighting back from the darkest places, and the opportunity for us to understand ourselves and those around us better. I am incredibly proud to be working alongside Oprah on this vital series."

Oprah appeared during Apple's services-focused March event, where she announced two documentaries coming to ‌Apple TV+‌ that would focus on sexual harassment and mental health themes, but the host made no mention of the latter series' connection with royalty.

Prince Harry has vigorously campaigned about mental health and spurred several initiatives in recent years to improve openness and support for sufferers. The Prince has also spoken candidly about his own personal experiences and struggles, particularly with regards to how the death of his mother, Princess Diana, affected both him and his brother, William.

‌Apple TV+‌, coming this fall in over 100 countries, will be an ad-free, subscription based service, with Apple's original shows and movies available via ‌Apple TV+‌ in the new Apple TV app.

Would they have made Breaking Bad? Too much drugs and violence. Game of Thrones? Too much death and nudity. Handmaid’s Tale? Too political I’d guess.

Everything I’ve seen so far just looks so wholesome and inoffensive.
Score: 37 Votes (Like | Disagree)

dan9700
Oprah is a liar so not watching anything see does
Score: 27 Votes (Like | Disagree)

fullauto
I’m all for anything that promotes and offers support and insight into dealing with, and enlightening others about mental health. Good use of the platform.
Score: 19 Votes (Like | Disagree)

xalea
What exactly is an Apple documentary on mental health going to accomplish? The greatest need for mental health services is for the homeless and those in poverty, on a local level. This is yet another "make me feel good about myself" kinda thing that serves no real purpose.
Score: 16 Votes (Like | Disagree)

It is.great shows always have politics, sex, violence or a combination of the above. If you remove all the above you’ll end up with some thing that’s might appeal young children but will probably bore adults to death.

Well see you're doing what I see so many people are doing these days, which is assuming that which applies to them applies to everyone else. When that mindset becomes prevalent we end up with people whose wants and needs are marginalized and trivialized. Just because an adult wants escape from the neverending bombardment of politics, sex, violence doesn't mean they have the mentality and preferences of children. There are movies and books for adults that tackle thought provoking subject matter without going into horrific details designed to shock the senses.

It was mostly adults, as I recall, who were fans of shows like "Touched by an Angel" and "Highway to Heaven". Yes, I'm in my 50's and miss an era when that sort of programming was more prevalent.

I did like action adventure and gory horror movies when I was in my late teens and 20's. As I got older and met real people or became aware of the real stories of family members who survived rape, torture, or saw someone mutilated or murdered (there are a lot of war refugees in my family) I began to question why I sought out watching depictions of suffering and violence as entertainment. Why would someone's horror and suffering entertain or distract or edify me in any way. I realized it didn't. It was a waste of my time.

As for sex, seen it once, seen it a hundred times. Zzzzz. I put up with it in some shows. It is sort of like golf, rather be playing than watching.

I do still like action adventure. Oddly enough there's nothing terribly graphic about action adventure movies. Stuff blows up and stunt men go flying, but it's all very cartoonish.

Those are my preferences. I am glad I may have the opportunity to see more of the kind of programs I prefer instead of having to watch old reruns for the rest of my life.

...then writes an essay imposing her grumpy views on everyone else.

Lol! Well this is a discussion forum. I'm discussing. And I am not imposing my views. Just discussing them. Just saying there are such things as adults who like mild programming, for lack of a better term. I'm not lobbying Congress to make you watch everything I want to watch.

But this is not the first time I've expressed an opinion on my viewing preferences and been met with extreme hostility for having those preferences. So I'm wondering who is imposing their views on whom.
Score: 11 Votes (Like | Disagree)
Read All Comments