Wednesday April 3, 2019 5:01 am PDT by Tim Hardwick
iFixit today shared a teardown of the resurrected iPad Air, confirming specs and providing some additional details about the component parts of Apple's new middle-tier tablet, which is compatible with the first-gen Apple Pencil. 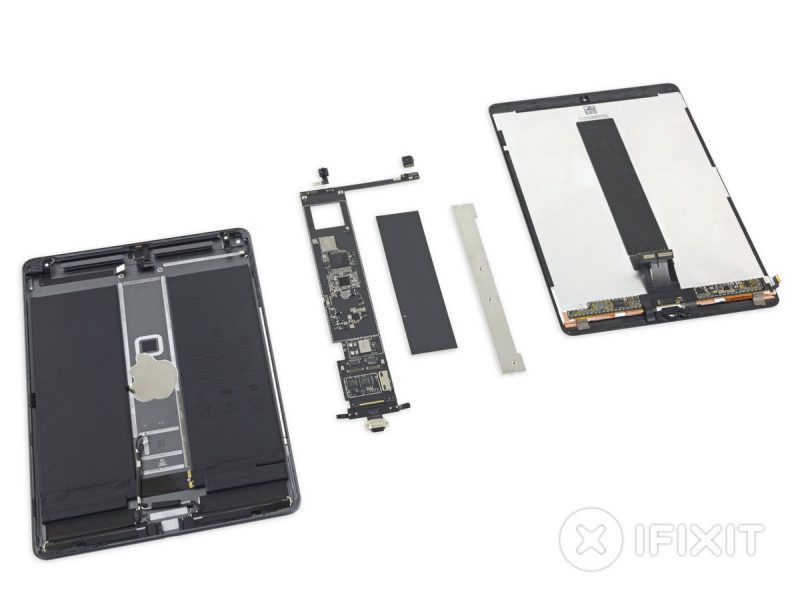 The iPad Air is identical in size and thickness to the 2017 10.5-inch iPad Pro, and just a bit lighter weight. iFixit notes that outwardly, the only design differences include a new, darker Space Gray color, the absence of a camera bump, and two speakers compared to the ‌iPad Pro‌'s four. The new model number is A2152.

Opening the ‌iPad‌ Air up reveals an internal layout and central logic board similar to Apple's 2017 ‌iPad Pro‌ range. The dual-celled 30.8 Wh battery is a little bigger than the 30.2 Wh Apple advertises on its site, and a provides a step up from the 27.6 Wh battery in the 2014 ‌iPad‌ Air 2. Battery life is advertised as up to 10 hours.

Meanwhile, Apple's A12 Bionic processor is layered over 3GB of RAM, and iFixit confirms the rear camera remains at 8 megapixels.

Otherwise, as iFixit notes, the size is similar, the Pencil support is similar, and the chips are similar to the old 10.5-inch ‌iPad Pro‌. However, the Air lacks the latter's ProMotion 120 Hz technology that's now exclusive to the 2018 11-inch and 12.9-inch ‌iPad Pro‌. ProMotion automatically adjusts the display to the movement of the content, for fluid scrolling, greater responsiveness and smoother motion.

The new ‌iPad‌ Air is harder to take apart than the late 10.5-inch ‌iPad Pro‌, since it lacks the latter's stretch-release adhesive pull tabs and includes extra adhesive near the top of the screen. As such, iFixit gives the new ‌iPad‌ Air a 2/10 for repairability, the same score the new ‌iPad‌ mini earned in yesterday's teardown.

A marginal improvement over the iPad Air 2 from 2014.

The only thing that wasn't drastically improved was the form factor. And the only new features missing, FaceID, ProMotion, Pencil Gen 2, and quad speakers, can be had for a mere $300 more.

Marginal? I must have missed the /s
Rating: 13 Votes

What’s the point of this iPad? I can’t see any.


To offer something more affordable under the ‘Pro line’. Considering everything it’s offering, it’s fairly competitive in features and it has first Gen Apple Pencil support. The 10.5 is like the perfect median of a size of an iPad that’s not too large or too small either.
Rating: 10 Votes

It's the 2019 iPad Air with a better display (pro motion) and better stereo speakers that actually sound like stereo. The only advantage of the 2019 iPad Air is the A12 processor. But the A10X processor in the 2017 iPad Pro is more than powerful enough for most people; when the 2017 iPP 10.5" came out, professional reviews and benchmark tests indicated it was as fast or faster than many mainstream laptop computers. I would conjecture that very few people need their iPad in 2019 to be more powerful than a typical laptop from 2017; and those that do can pony up and buy the 2018 iPad Pro.

Still, I'm happy that Apple is making the 2019 iPad Air. It's a good option for people who want more than the basic 9.7" iPad but can't afford the 2018 iPad Pro. I'm also happy that Apple has not retired the 10.5" form factor. The increase in screen size over the 9.7" model, while modest, is still enough to be a meaningful improvement, and yet the difference in size and weight between the two models is hardly noticeable.
Rating: 8 Votes

What’s the point of this iPad? I can’t see any.


To keep the iPad Pro price unreasonable high. Same thing happened to the iPhone when they squeezed in the XR or the 8 at the same time as the X
Rating: 7 Votes

dannys1
Yeah but you can't upgrade it...
Rating: 6 Votes


I Have the iPad Mini 2, was a present for my girlfriend but rarely used it when abroad, she left it here last time, have little use for it, sometimes comes in handy but could easily do all and more on my 2012 13" MBP, sadly my Tv provider does not have a web browser viewer, is available on the iPad though, don't see that much TV, better stream from other sources, pick and watch instead of the content that's available from my provider, Tv sucks overall.

The Air seems to be a good upgrade from earlier versions, for those who have it, enjoy.
Rating: 6 Votes

StellarVixen
All in all, it is a good buy for us who use tablets as secondary devices, for browsing, entertainment and such. I see this as a good buy. I couldn't care less about bezels and 120 Hz display.
Rating: 5 Votes

Relentless Power
This is probably my favorite size iPad with the 10.5 display. I’m completely content that they added the A12 processor and True tone, Apple Pencil support, however, if they would’ve added Promotion display, this would’ve been a ‘home-run’ by my standards. But still, a nice refresh to the the Air alongside the refreshed Mini.
Rating: 4 Votes

I couldn't care less about bezels and 120 Hz display.