iFixit today shared a teardown of the new iPad mini, confirming specs and providing some additional details about the component parts of Apple's smallest fifth-generation tablet, which is compatible with the first-gen Apple Pencil. 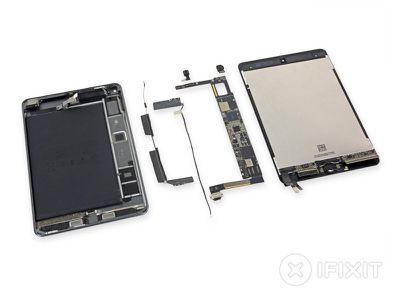 iFixit notes that the only exterior clue that distinguishes the new iPad mini from the earlier model is its model number, A2133, and the removal of regulatory markings on the back, which can now be found in software.

Inside, the new mini has an 8-megapixel rear camera and inherits the 7-megapixel ƒ/2.2 front-facing camera setup that first appeared in the 10.5-inch iPad Pro, offering a big step up from the 1.2-megapixel sensor in the ‌iPad mini‌ 4.

Other changes in evidence include a faster A12 Bionic processor, 3GB of RAM (up from 2GB), True Tone sensors, a migrated set of microphones now centered near the front-facing camera, and a different battery type in the ‌iPad mini‌ 5, although its 19.32 Wh rating matches that offered by the previous ‌iPad mini‌.

While many components are modular and can be replaced independently, iFixit notes that gobs of adhesive hold many parts and cables in place, including the Home button, complicating all repairs. Replacing the battery is also said to be possible, but still unnecessarily difficult. As a result, ‌iPad mini‌ earns an iFixit repairability score of 2/10.

44267547
The Mini 5 was a decent refresh. Not just with the fact they added Apple Pencil support, but I was pleasantly surprised they used the A12 bionic in the mini, and True tone is also a nice addition.
Score: 23 Votes (Like | Disagree)

Sorry to hear about all that adhesive that they used.

Glue doesn’t bother me anymore. It serves its purpose well and doesn’t affect everyday use.

I’ve never needed to disassemble any of my iPads. I don’t know anyone in real life who has.
Score: 11 Votes (Like | Disagree)

Why are you so opposed to Face ID?

My problem is that I'm so ugly, that Face ID won't work. So I'm personally holding out for FingerID. It's like FaceID, but you gotta give your iPad the finger and it'll unlock.
Score: 10 Votes (Like | Disagree)

Why couldn’t they make this Apple Pencil 2 capable?

No way to charge it, as the Mini does not have a flat side to magnetically attach the pencil on.
Score: 8 Votes (Like | Disagree)

obiwan
I'm pretty pleased with this iPad mini refresh. Apple had sense not (or was too lazy) to start screwing around with the design by removing headphone jacks and adding expensive and unnecessary FaceID features etc. They kept what works and gave it an upgrade where it needed it most (the internals). I now have a fairly reasonable upgrade path for my iPhone 6S when it dies. I don't want or need Face ID and I do need the headphone jack. Apple have screwed over users like me with the direction they've been taking with the iPhone and price increases. I'll use an iPad mini instead.
Score: 8 Votes (Like | Disagree)

I'm pretty pleased with this iPad mini refresh. Apple had sense not (or was too lazy) to start screwing around with the design by removing headphone jacks and adding expensive and unnecessary FaceID features etc. They kept what works and gave it an upgrade where it needed it most (the internals). I now have a fairly reasonable upgrade path for my iPhone 6S when it dies. I don't want or need Face ID and I do need the headphone jack. Apple have screwed over users like me with the direction they've been taking with the iPhone and price increases. I'll use an iPad mini instead.

Why are you so opposed to Face ID? You could literally drop from the ceiling into a sea of droids and say "Hello there!" while looking at your phone and it'll unlock.

Thursday January 26, 2023 6:30 am PST by Tim Hardwick
The new Mac Pro coming later this year is expected to feature the same spacious modular design as the 2019 model, but with fresh concerns over its lack of upgradeability surfacing, some users are beginning to wonder what the transition away from Intel architecture actually means for Apple's most powerful Mac. The current Intel Mac Pro that Apple sells is popular with creative professionals...
Read Full Article • 522 comments