Apple last week surprised us with a brand new iPad in the iPad Air family and a new iPad mini 5, both of which are outfitted with Apple's latest chip technology.

Both the ‌iPad mini‌ 5 and the ‌iPad Air‌ 3 began shipping out to customers, and, as of today, are available in stores. We picked up both tablets to give MacRumors readers a look at Apple's new middle-tier iPads.

Subscribe to the MacRumors YouTube channel for more videos.
Priced at $399 for the ‌iPad mini‌ and $499 for the ‌iPad Air‌, Apple's refreshed iPads are not as expensive as the iPad Pro (starts at $799) nor as affordable as the 6th-generation 2018 ‌iPad‌ (starts at $329), and the hardware and design match up with a middle-of-the-road tablet. 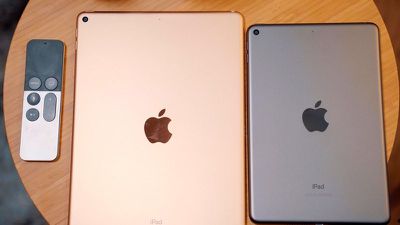 In comparison, the ‌iPad Pro‌ has much slimmer bezels thanks to the removal of ‌Touch ID‌ in favor of Face ID, while the $329 ‌iPad‌ has the same general design but a body that's not as slim.

When it comes to the screen, both of these tablets are using a laminated Retina display that supports wide color for vivid, true to life images and True Tone for adjusting the white balance to match the ambient lighting in the room. It's a better display than the non-laminated display on Apple's cheapest ‌iPad‌, but lacks the ProMotion technology used in the ‌iPad Pro‌ for a variable refresh rate up to 120Hz.

Inside, the ‌iPad Air‌ and the ‌iPad mini‌ are using the A12 Bionic chip, which is the same chip that's in the 2018 iPhone lineup. The $329 ‌iPad‌ is still using an A10 Fusion chip from the ‌iPhone‌ 7 era, while the ‌iPad Pro‌ models use a faster A12X chip.

The two iPads have mediocre 8-megapixel rear cameras, the same camera that's in the $329 ‌iPad‌, but the 7-megapixel front-facing camera is the same camera (minus ‌Face ID‌ technology) used in the ‌iPad Pro‌. It's odd to have front and rear cameras that are nearly on par, but it makes sense if you think of the ‌iPad‌ as a FaceTiming device more so than a photography device.

Old ‌iPad Air‌ on left, new ‌iPad Air‌ on right
If you're using an older ‌iPad‌ and are in need of an upgrade, you're not going to go wrong with the ‌iPad mini‌ 5 or the ‌iPad Air‌ 3 given the incredible speed boosts these tablets bring thanks to the A12 chip. As everyday tablets, the ‌iPad mini‌ and ‌iPad Air‌ are a solid value and a welcome addition to Apple's ‌iPad‌ lineup, which was previously split between high end (‌iPad Pro‌) and low end (‌iPad‌). Check out our iPad Buyer's Guide for help choosing an ‌iPad‌ if you're not sure which one is right for you.

What do you think of the new ‌iPad mini‌ and the new ‌iPad Air‌? Have you purchased one or are you planning to get one? Let us know in the comments.

kirk.israel
I bought an iPad Mini yesterday. It's great, very comfortable for doodling on, and a great reader. And the first iPad I've bothered to set up Touch ID on. People who hate on "but the bezels" can go suck an egg - this is very comfortable to hold. I'm sure Apple will provide a Pro version in a few years if you REALLY want to spend a few more hundred for bezels and a flat clip-on pencil.
Score: 30 Votes (Like | Disagree)

coolfactor
The physical-click Home button is what baffles me. I wonder if they are recycling these components from older devices? I'd be surprised, since this clickable button does tend to wear out. The haptic Home button was a smart upgrade, so it's confusing why Apple didn't standardize on that. Maybe the haptic feedback is not as effective on a tablet vs a phone?
Score: 13 Votes (Like | Disagree)

NickName99
I got my iPad Mini on Wednesday. It’s brilliant. The laminated TrueTone P3 display looks great. A12 is speedy. 3GB RAM confirmed in GeekBench. TouchID is gen 2, pretty much instant. This is my first iPad, I’ve never wanted a full size one. I’m very happy with the $399 price, the performance and display. Recommended!
Score: 13 Votes (Like | Disagree)

Skyblve
Just got the iPad mini. It is amazing, keyboard is much easier to use than iPad Pro and iPad Air. Fast Touch ID gen2 and it just amazing for the price range. ~300
Score: 11 Votes (Like | Disagree)

New iPads are always appreciated. Did they upgrade the screen quality or camera quality?

Did you read the article?
Score: 11 Votes (Like | Disagree)

A lot of mini lovers in here and god love ‘em. I thought it was put out to pasture when the education 9.7” was released last year.

Full sized iPads have never interested in in the least, who wants to lug that around? The Mini is the size of a book, it’s perfect. It’s always been a bit too slow, the display lacked TrueTone, the $399 model only had 16GB, but this time it checks all the boxes. It’s great to have options!
Score: 10 Votes (Like | Disagree)
Read All Comments