The iOS 12.3 and tvOS 12.3 betas released to developers this morning bring the new TV app that Apple first debuted at its March event on Monday.

Apple's revamped TV app, which is available on iOS devices and the Apple TV at the current time, features a new look and updated functionality.

Subscribe to the MacRumors YouTube channel for more videos.
"Watch Now" with its "Up Next" function is still front and center in the TV app, but there's a new machine learning-based recommendation engine that will surface personalized content suggestions for you based on what you like to watch.

Up Next will continue to keep track of what you're watching so you'll never forget what episode of a TV show you're on or where you left off watching a movie, while the new "For You" recommendation feature will draw in content from more than 150 streaming apps, including Hulu, Amazon Prime, DirecTV Now, PlayStation Vue, and more. In addition to the "For You" section, the TV app will also offer "Because you watched..." recommendations much like Netflix. 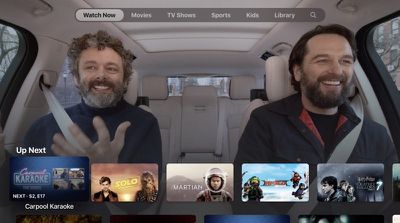 The overall app interface has been streamlined with sections for Movies, TV Shows, Sports, and Kids content at the top on both ‌Apple TV‌ and iPhone, while Library houses a list of content that you've purchased from iTunes.

There is a new "Channels" feature in the TV app, which is one of the main new components that Apple added. Channels are subscription services that you can sign up for and watch within the TV app without having to open up another app.

So, for example, if you come across a show you want to watch on your ‌iPhone‌ or ‌Apple TV‌ that's on Showtime, you can tap to subscribe to Showtime right in the TV app, and then you can watch that show without leaving the app.

Some of the new Channels that will be supported include CBS All Access, Starz, Showtime, HBO, Nickelodeon, Mubi, The History Channel Vault, and Comedy Central Now. During the beta, though, users can subscribe to Showtime, Starz, Smithsonian, and Tastemade.

You'll still get recommendations for content from services that aren't a part of Channels, so while Hulu isn't something you can subscribe to and watch in the TV app itself (you need to watch Hulu content in the Hulu app), you can still see Hulu content suggestions just like the original TV app.

Basically, while you'll get recommendations from a huge list of sources (minus Netflix), there are a small handful of content sources where subscribing and watching has been streamlined. For most content, you'll still need to watch in a third-party app at this time.

In the future, Apple's TV app will house Apple TV+, Apple's newly announced streaming service that will feature all of its original shows and movies.

Apple plans to introduce the new TV app in May, so we can expect the iOS 12.3 and tvOS 12.3 updates to be released sometime that month. Apple also plans to bring the TV app to the Mac, but that won't happen until the fall.

lifjoy
Can the Sports and Kids tabs at the top of the UI be disabled by us viewers?
Score: 11 Votes (Like | Disagree)

abrantes09
I set up this app today, more like the app set up itself, but the App is a hidden gem in the ecosystem. Although I am still waiting for the public beta, the old UI is great now considering it pulls hulu, prime, netflix and itunes all together and I always underestimated that ability. Only complaint, I really need a MacOS app for this. I know it requires native apps to work, but Im sure apple could figure out some cloud thing.
Score: 3 Votes (Like | Disagree)

Worthless without Netflix and Hulu integration.

Hulu, along with about 100 other apps, already integrates with the TV app, including its Up Next watchlist. Netflix is the only major on-demand subscription service that doesn't work with it. So basically, I maintain two watchlists, one in Netflix and one in the TV app for everything else. I'd probably watch Netflix more if their shows were integrated along with everything else in the TV app.
Score: 3 Votes (Like | Disagree)

The cynical part of me says that it will offer features and bundles that no one else does. And you will have to buy a new 3-5000 dollar Apple computer to be able to use it.

Don't take that comment seriously, I had a bad day and am feeling generally pessimistic right now.

Sorry you’re having a bad day. Tomorrow is another day
Score: 3 Votes (Like | Disagree)

Is the video playback UI on iOS improved in anyway? Such as 15 second rewind and forward buttons? It baffles me that iOS TV app's playback UI is stuck in iOS 11 era (with almost impossible to use scrubber at the top) when web player is updated with 15 second rewind/forward and scrubber on the bottom.

What do you mean? Apple TV has always had 15s rewind / forward. Just click the left and right edge of the tap surface.
Score: 3 Votes (Like | Disagree)
Read All Comments