The new ‌Apple TV‌ HD is being offered alongside the more expensive ‌Apple TV‌ 4K, which is the fifth-generation ‌Apple TV‌ released in 2017. 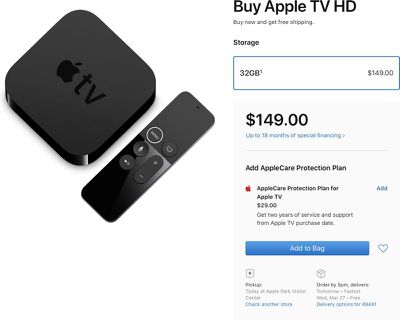 Apple has continued selling the 32GB $149 fourth-generation ‌Apple TV‌ alongside the 4K model for those who don't need 4K content. The ‌Apple TV‌ 4K is $30 more expensive, starting at $179 for 32GB of storage.

Both the ‌Apple TV‌ 4K and the rebranded ‌Apple TV‌ HD will provide access to the revamped TV app, which will house Apple's upcoming ‌Apple TV+‌ subscription service for its original content and offer access to TV "Channels" right within the TV app.

With the redesigned TV app, you won't need to swap between different TV apps to access your favorite shows, as your subscriptions to services like HBO, Starz, SHOWTIME, CBS All Access, Smithsonian Channel, EPIX, Tastemade, and Noggin and will let you watch content from those services in the TV app. If you're not already a subscriber, you can even subscribe to those "Channels" in the TV app.

‌Apple TV‌ Channels will be limited to a handful of cable channels at launch, though Apple plans to add more in the future. Hulu and Netflix will not be participating, so you will still need to open up the Hulu and Netflix apps to watch that content.

The updated TV app will be even better at recommending content to you that you might want to watch, and it will incorporate more than 150 streaming apps, including Amazon Prime, Hulu, and all of the ‌Apple TV‌ Channels for personalization and content recommendation purposes. As mentioned above, some of the content will be watchable right in the TV app, while other content will bring you to a third-party app.

The TV app will be home to Apple's TV+ service, which is launching this fall. TV+ will offer up access to all of Apple's original programming, and the company has more than 30 shows in the works.

Apple plans to introduce its revamped ‌Apple TV‌ app through an iOS and tvOS update coming this May. Apple also plans to bring the TV app to the Mac this fall.

lunarworks
Would have been nice if they'd taken the opportunity to drop the price, seeing as it's no longer going to be required for accessing Apple's services.
Score: 37 Votes (Like | Disagree)

dannyyankou
It would be nice if they updated the hardware, the chip is already 4.5 years old.
Score: 25 Votes (Like | Disagree)

zorinlynx
I wonder how much longer they plan to sell this.

I can't recommend that anybody buy this instead of the 4K version, even if you don't have a 4K TV; for an extra $30 you get a much faster CPU and 4K support for if you upgrade your TV in the future.

These things can't be that expensive to make; Apple really should discontinue this model and lower the price of the 4K version to match. They're gonna make far more money on the content anyway.
Score: 23 Votes (Like | Disagree)